Doherty warns against government attempt to reshape debate on Lisbon 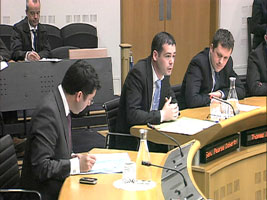 SINN FÉIN Senator Pearse Doherty this week addressed the inaugural meeting of the Oireachtas sub committee tasked with tackling Irish voters’ rejection of the Lisbon Treaty.
Below we reprint Doherty’s speech in full:

It is Sinn Féin’s intention to take a constructive and positive role in the work of this Committee. I believe firmly that it is not only the responsibility of those who supported the Lisbon Treaty to address the aftermath of its rejection, those of us who campaigned against it must also play our part in pursuing a better deal for Ireland and the EU.
However we will fight you tooth and nail should you decide to cynically manipulate the work of this committee to set aside the democratic wishes of the people. Sinn Féin continues to be deeply concerned that it is the government’s intention, with the support of Labour and Fine Gael, to use this committee as simply a space to prepare the groundwork for a re-run of Lisbon. It is clear from the committee’s terms of reference that the government is endeavouring to reshape the public debate on Lisbon away from the Treaty itself to one of Ireland’s membership of the EU. This is a deeply dishonest move and one that my party sought to address by changes we proposed to the terms of reference.
We are not willing to facilitate a narrowly defined stock taking exercise. Nor are we willing to participate in any exercise aimed at clearing the ground for a re-run of Lisbon. Opt outs and declarations will not change the substantive problems with this Treaty. We need a robust public debate on the future of the European Union. We need to agree a schedule of work that engages with the community and voluntary sector, development agencies and trade unions. The debate must be brought into schools and universities. It must be led by the general public and not politicians who clearly from the referendum result, are out of sync with ordinary people. Critically we must use the outcome of this debate to inform and change government policy on the EU.
It is also important to point out that Ireland’s EU partners are not questioning this state’s role within Europe. Our standing within the Union has not been compromised, despite the huffing and puffing of many politicians. We have an excellent reputation in the EU for our hard work and negotiating skills. Let’s use this reputation for the betterment of the union’s future.
However that said there is no doubt that Ireland’s rejection of Lisbon is a major frustration for the EU political establishment particularly in the context of the EU Constitution failing to secure popular support.
This latest phase of EU integration is seven years in the making. I put it to the committee that perhaps the Irish and European political class need finally to realise that maybe, just maybe, the concerns raised by the Irish, French and Dutch and also many millions of ordinary people throughout the EU simply need to be listened to and acted upon. That is what the work of this committee needs to focus on.
The founding principles of EU were and must continue to be peace and prosperity. It is in this context that I want to re-emphasise to the committee that Sinn Féin believes Ireland’s place is in Europe. We want to see Ireland continue to play a central role in shaping the future of the EU in the interests of all citizens. We are ambitious for what we as a small member state can achieve in the interest of all the Union’s people.
For Sinn Féin this means changing the present course of the European Union. We want to move it away from the centralising, privatising and militarising direction it is currently on, in favour of a more democratic, social and peaceful road, promoting prosperity and equality for all.
I look forward to working with you all over the coming months.