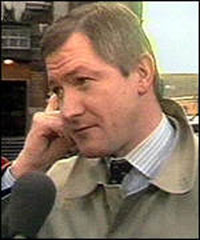 US Democratic Party Presedential candidate Barack Obama is backing Judge Peter Cory’s call for an independent inquiry into the 1989 killing of Belfast human rights solicitor Pat Finucane.
In response to lobbying by the Irish American Unity Conference (IAUC) and the Ancient Order of Hiberians (AOH) a spokesperson for the Obama campaign stated that, “Senator Obama believes there should be an independent, public inquiry as Judge Cory recommended”.
As part of their lobbying the groups outlined the view that in “the past the role of the security forces in Northern Ireland, both the Royal Ulster Constabulary and the British Army, has been involved in a ‘Dirty War’.
“Both the nationalist and loyalist communities are gravely concerned about the issue of collusion and truth recovery”.
The IAUC and AOH told the Obama campaign that, “full disclosure would expose those within the police and army who were responsible for past atrocities and bring about their removal from the Security Forces.  This disclosure would increase community confidence in the security forces and make them more accountable to the communities they serve”.
In response a spokesperson for Obama said that, “Senator Obama would support a reconciliation process that seeks the comprehensive truth about past violence”.
The British Government has faced widespread criticism over it’s refusal to order an independent, international inquiry into the assassination of Pat Finucane, who was shot dead by the UDA in February 1989.
Three of those involved in the killing, Brian Nelson, Ken Barrett and William Stobie, were RUC agents.
Special Branch was aware of the plot against Pat Finucane yet let the killing go ahead.
Reacting to the news Pat Finucane’s son Michael welcomed Senator Obama’s intervention saying, “as Senator Obama points out, this was a recommendation of Judge Cory as a way to look at all the very serious circumstances arising out of the death of Pat Finucane”.
Meanwhile in a statement the Sinn Féin President Gerry Adams has welcomed the endorsement of Senator Obama of an Independent Inquiry into the murder of Pat Finucane.
Said Adams, “this is an important and welcome position by the US Democratic candidate. It is crucial that state collusion continues to be highlighted.
“The onus is on the British government to acknowledge its role and that of its state forces directly and indirectly in the killing of citizens, including Pat Finucane.”