DERRY 1968 : A turning point for Civil Rights and the North 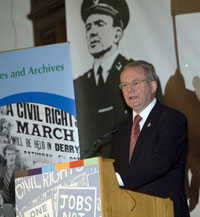 40 YEARS ON: ‘What happened in Derry 1968 is directly relevant to where we are today’

DERRY’S Guildhall was the setting last weekend for events marking the 40th anniversary of the famous 5 October 1968 civil rights march in Derry, which was a turning point in modern Irish history.
The event was addressed by a number of speakers, including the North’s joint First Minister, Martin McGuinness, and President Mary McAleese.
Below we reprint the full text of Martin McGuinness’s address at the Guildhall.