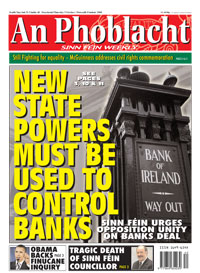 State guarantee needed but banks must be controlled

We need to know what assurance will be given to those who have lost their jobs in the construction sector, those who are mortgaged to the hilt and are facing negative equity in their homes, those who risk losing their homes and those who did not earn bonuses during the boom years while others reaped millions

THE Sinn Féin Ard Chomhairle on Saturday, 4 October, discussed the financial crisis and what should happen next following the adoption of the Government guarantee to the banks.
Party Chairperson Mary Lou McDonald MEP said:
“There needs to be emphasis now on the terms and conditions that must be placed on the banks to ensure a proper payback for the Irish taxpayer.”
She set out the terms and conditions which are needed “at a very minimum”:
•    A new bank levy - a proportion of this money should be diverted to the community-based, non-profit debt counselling organisation, MABS (Money Advice and Budgeting Service) to help homeowners currently in difficulty;
•    Requirement to negotiate with mortgage holders on low incomes and a plan for the reasonable repayment of their mortgage, including a moratorium on home repossessions of those families struggling to make payments;
•    Initiatives to review the writing-off of negative equity in homes;
•    A refocus of banking business in support of indigenous small and medium business, particularly those in the export sector;
•    Introduction of a strict and effective regulatory regime to monitor bank practice;
•    Requirement on bank management to forego bonuses for the length of time covered by this guarantee;
•    Review of salary structure of executive level management;
•    Pay should now be awarded on the basis of consistent salaries – not on performance returns and risk
•    Two-year performance review of all those in executive level management