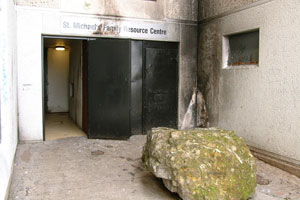 FOUR months ago, residents of St Michael’s Estate, Inchicore, suffered a huge blow when a regeneration plan was dropped as the contracted construction company pulled out of the deal.
On Monday of last week, residents were told by Dublin City Council that a new bidder has emerged. This has raised expectations but people are naturally nervous, given what has happened in the very recent past. Now the families in St Michael’s are urging people to back their decade-long campaign by signing the St Michael’s Regeneration Team’s online petition (see box).
Sinn Féin Councillor Críona Ní Dhálaigh is on the St Michael’s Regeneration Board, set up in 2001 and made up of local residents and community groups.
Críona Ní Dhálaigh wants the Government and Dublin City Council to ensure there is not another collapse of this long-overdue project. “What we don’t need is another Groundhog Day.”
Natasha Farrell has lived in St Michael’s since she was ten. A mother of three, she is one of many residents who have seen the proposed idea started and stopped and started again over the years. She is concerned at a lack of transparency around the project. She told An Phoblacht  last Tuesday:
“The whole thing is unclear and we don’t know yet if the new bidder will go ahead with the development – we could be back to square one. It’s very worrying for us.”
The local community came up with a plan for the development which the then Minister for the Environment rejected in favour of the public-private partnership (PPP) route. PPP is a way of procuring public services and infrastructure by combining the public and private sectors.
Under duress, the local community eventually agreed to the PPP proposal seven years ago because it was to include a social package, including a health centre, youth cafe and other facilities including social housing.
The agreed PPP regeneration plan included the physical and social regeneration of the 14-acre site to include 720 dwellings (165 social, 75 affordable, 480 private), with a civic centre with library, parish centre, three crèches, youth café, family resource centre, healthcare centre, two football pitches, play areas, new urban square, village green and public square.
Críona Ní Dhálaigh said:
“The contract, which was to be finalised by last January, was to go to McNamara Construction Company but McNamara kept dragging his feet, coming up with various excuses relating to inflation and costs for soil reclamation and was gradually undermining the commitment to a social package.
“By May this year it was clear that he would not go through with the deal.
“The community’s worst fears have materialised in relation to the development. Now they are literally living on a derelict site.
“They are calling for the PPP plan to go ahead as agreed. The fear now is that if it is left to the Government to go ahead with a development that the acreage will only be five rather than the proposed 15-acre development, which was to include the social facilities. The human side of the story is stark.”
McNamara has also pulled out of other developments in O’Devaney Gardens, Dominick Street and Seán MacDermott Street.
McNamara has disengaged from the regeneration projects in O’Devaney Gardens, Infirmary Road and the Convent Lands and he is to make a contribution of €1.5 million to the council for costs incurred.

“We want An Taoiseach Brian Cowen, Minister John Gormley and Dublin City Council to take action to ensure that the St Michael’s Estate 14 acres site will be physically and socially regenerated as a matter of urgency.
“The PPP regeneration process forced on the people of St Michael’s Estate has taken over seven years and cost the state millions despite that fact that not one brick has been laid to date.
“We want action now!”

It’s back to the drawing board for O’Devaney Gardens