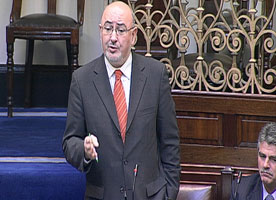 THE Dáil returned for its autumn session this week in political and economic conditions that have changed dramatically since the start of 2008. Bertie Ahern has been replaced by Brian Cowen as Taoiseach. The Progressive Democrats are about to disappear. Above all, the economy has been plunged into a recession.
What is now the Fianna Fáil/Green Cabinet resumed their places on the Government benches in Leinster House with their blinkers firmly in place. There was no recognition of the depth of the economic crisis nationally and globally and the only legislation on the agenda was for changes in electoral boundaries.
The Programme for Government produced by Fianna Fáil, the PDs and the Greens after the general election last year has now become a dead letter. Challenging Taoiseach Brian Cowen on Wednesday morning, Sinn Féin Dáil leader Caoimhghín Ó Caoláin called on the Government to put before the Dáil and the public their real programme. He said the public are being made to pay the price for a decade of Government that “put greed before need” and that, in the new Dáil term, Sinn Féin will “resist tooth and nail the threatened cuts to vital public services”.
The Sinn Féin Dáil leader said:
“We in Sinn Féin were among those who warned repeatedly that over-reliance on the construction sector and foreign direct investment would lead to widespread unemployment with the inevitable fall in grossly inflated house prices and with a global slump. These two factors have now coincided and the jobless numbers are growing by the week.
“Already the people are being made to pay the price for a decade of Government which put greed before need. Our health and education systems are bursting at the seams and it is people on lower incomes who suffer most as a result of these sub-standard services.
“This is a very serious situation for our health services because, as unemployment grows, so does the number of people below the very low income threshold for medical card qualification. The Government should end all subsidies to the private health business, including the private hospital co-location scheme, and plough those funds back into the public system.”
The Sinn Féin TD accused the Government and the Health Service Executive of presiding over cuts in people’s health services during the past year.
“Long forgotten is the promise of Minister Harney and HSE Chief Drumm that these cuts would not affect patient care. Sinn Féin has been monitoring these cuts over the summer and in the coming Dáil term we will resist tooth and nail further threatened cuts, especially in health and education.
“I challenge this administration to put before the Dáil and the public their real Programme for Government. The 2007 programme is now no more than a mask to disguise the real Government ‘Programme of Cuts’.”

HEALTH BILL
Commenting on the publication by the Government of its list of promised Bills, Ó Caoláin said that a long-promised and key Bill on Health was being deferred again because the Government is unwilling to act on inequality in our Health system.
“In the Legislative Programme published by the Government today, a long-promised and key piece of legislation has been dropped. The Government says it is ‘not possible to indicate’ when the Eligibility for Health & Personal Social Services Bill will be published. It was promised earlier this year for publication in 2009.
“This Bill was supposed to clarify and update provisions relating to the eligibility of people to the services provided by the Health Service Executive. Any such Bill would have to tackle the gross inequality in our health system and any debate on it would expose those inequalities.
“Last month, the Institute of Public Health published an all-Ireland survey showing that in this state 38 per cent of those at risk of poverty (i.e. living on an income of less than €202.50 per week) reported suffering from a chronic illness compared to 23 per cent of the general population. It is estimated that over 5,000 people die prematurely each year in Ireland as a result of social deprivation, including health inequality.The Government has no will to tackle this.”