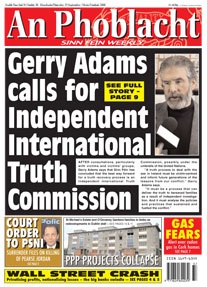 
IN this week’s An Phoblacht, Sinn Féin President Gerry Adams MP MLA says that, following a process of consultation and discussion, particularly with victims and victims groups, Sinn Féin has concluded that the best way forward on this issue is through the establishment of an Independent International Truth Commission.

IN AUGUST, I attended the unveiling of a mural on the Whiterock Road in west Belfast. It was erected by the families of 11 people who were killed by British Paras in the Ballymurphy area in the 48 hours after the introduction of internment in August 1971.
The British Government introduced internment at the behest of the then unionist regime. It was a catastrophic decision which saw a dramatic escalation in the conflict. The human cost on families and communities across the North was incalculable.
The objective of the families at the Whiterock Road event was to draw attention to the murder of their loved ones 37 years ago. All 11 were civilians. One was the local parish priest; another was a mother of eight children. Forty-seven children were left without a parent as a result of this massacre. And like Bloody Sunday and so many other similar incidents over the years, there was a cover-up of the circumstances.
In the last few years these families have come together to organise and campaign for the truth. The Ballymurphy Massacre Committee is demanding an independent international investigation into all of the circumstances surrounding these deaths and for the British Government to issue a statement of innocence and a public apology.
They are not alone. Campaigning groups like Relatives for Justice, Justice for the Forgotten, the Pat Finucane Centre, An Fhirinne, Firinne and the Ardoyne Commemoration Project are making similar demands. Also across this island and in Britain there are other families involved in campaigns. Some of these are victims of republican actions who are also seeking truth.
The issue of state killings and of collusion – which was an administrative practice and part of the British Government’s strategy – must also be dealt with.
There is understandable concern about the British Government’s commitment to a truth recovery process. Their actions in refusing to co-operate with the Barron Inquiry into the Dublin and Monaghan bombings; their refusal to hand over files in relation to the killing of Pat Finucane and others; and their wilful stalling and obstruction of the Saville Inquiry, are all evidence of an unwillingness on the part of the British Government and its military and intelligence establishment to end the cover-ups and to take responsibility for their actions during the conflict.
Brushing it under the carpet, revising our history to exorcise the role of the British state in fomenting and prolonging conflict in our country, is in no one’s interest – especially the families.
Republicans have clearly acknowledged many times the hurt they inflicted during the conflict. I have expressed my personal and sincere regret and apologised for that hurt. The IRA has also acknowledged what it has done. That is the right and proper thing to do. The IRA has apologised to all those non-combatants it killed or injured and their families.
For our part, Sinn Féin is very mindful of all of the difficulties involved in truth recovery, particularly for victims and their families. But we believe that as society seeks to leave conflict behind and to move forward there is a requirement that all of us address the tragic human consequences of the past.
Sinn Féin supports all of the families in their efforts to achieve truth. In 2003, Sinn Féin published a discussion document on Truth.  Its purpose was to set out our view of the timing and purpose of a truth recovery process and the nature and form of such a process.
In this spirit, Sinn Féin has put forward principles which we believe should underpin any effective truth recovery process.
The principles we identified are:–

Those of us charged with political responsibility must agree and deliver a process that is meaningful and substantive. There is an onus on all political leaders to promote this. This includes the Irish Government, which has a constitutional, legal and moral responsibility to actively promote this course of action.
That means thinking beyond any sectarian, sectional, party political or self-interest.
So, a truth process to deal with the war in Ireland must be victim-centred and inform future generations of the lessons from our conflict.
It must be a process that can deliver the truth to bereaved families as a result of independent investigation.
And it must analyse the policies and practices that sustained and fuelled the conflict.
Being victim-centred means that it must embrace all the victims, all the protagonists, whether they live in Ireland or England or elsewhere.
A truth process must reach out to these people.
One way of achieving an independent process is to have an international inquiry. The United Nations or another reputable agency could be involved. In Ireland, many of the victims’ groups have been looking at the possibility of establishing an Independent International Truth Commission.
Sinn Féin has now met many of these groups and we have concluded that the establishment of an Independent International Truth Commission is the best way of taking this issue forward.
Key to the success of such a commission is the full co-operation by all relevant parties. And clearly the willingness of individuals to voluntarily participate will be greatly enhanced if the commission is seen to be independent, have an international dimension and be fair and equitable.
Of course, it won’t be easy. There are vested groups who will not want the truth and who will oppose the creation of a meaningful truth recovery process. So this is going to be an immensely difficult and painful process and experience. It must therefore be conducted in a sensitive and generous way.
Building a united, harmonious society demands that these difficult issues are dealt with in an inclusive way as a necessary part of putting the past behind us. Looking after victims and victims’ families and survivors is a significant and important part of this.

• DUBLIN/MONAGHAN: British Government refused to co-operate with the Barron Inquiry