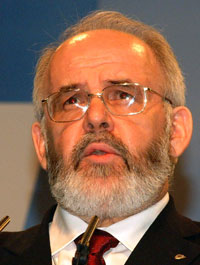 CURRENT issues affecting the Peace Process and Irish unity were heard by British trade unionists last week when Sinn Féin Assembly Member and Deputy Speaker Francie Molloy addressed a fringe meeting at the annual conference of the Trades Union Congress in Brighton.
The issues of equality and ensuring that all aspects of the Good Friday Agreement were implemented remained key priorities, Francie Molloy explained, and stressed that nothing less could be accepted. The reasons for the ongoing crisis around the failure to transfer powers on justice and policing were outlined. The Sinn Féin MLA urged trade union members who had strongly supported the Peace Process to use their influence and organisation to keep the pressure on the British Government in relation to these critical issues.
He reiterated Sinn Féin’s goal of achieving Irish unity and explained that the party will be stepping up its presence in Britain, and in the wider international context, to encourage a discussion and campaign around Irish unity and the future relationship between Britain and Ireland.

LINKS
Seán Oliver, head of Sinn Féin’s European and British departments, told delegates at the meeting of Sinn Féin’s view of the important role of trade unions and that the party is keen to link up with progressive people to advance a common agenda of equality and social justice. He said that Sinn Féin is developing a positive relationship with trade unions across the island of Ireland and is keen to engage with British trade unionists in support of the Peace Process and in relation to the discussion on Irish reunification.
In the audience, Communications Workers’ Union general secretary Billy Hayes explained his strong support for the progress that has been made and that it is important to keep the issues on the agenda, both in the trade union movement and more widely. He said that dialogue is key and that the CWU has been pleased to provide platforms in Britain to take this forward. He raised the issue of Royal Mail, which is still run in the Six Counties from Scotland.

UNITE THE UNION
Jimmy Kelly, from Unite the Union in Ireland, spoke from the floor of the work Unite has done with Sinn Féin TD Arthur Morgan, not least in promoting a Bill to amend the Constitution to ensure trade union rights, in particular the right to collective bargaining.
Delegates from public service union Unison reminded the meeting of the role of trade unions in the Civil Rights movement and, with others, reiterated how equality, pay and ‘bread and butter’ issues affect all communities and benefit all.
Whilst the focus of the TUC was clearly the current economic problems, the dissatisfaction over the direction of the Labour Government and the growing concern over jobs, pay, privatisation and conditions, keeping Ireland on the agenda for the British trade union movement remains an important issue. With a large number of first-generation and second-generation Irish people active at all levels of the movement, together with a shift in recent years towards the progressive left at a leadership level, there is a clear interest and willingness to take up these issues in the future.

AS PART of its ongoing work in Britain, Sinn Féin is sending a delegation to the British Labour Party conference in Manchester from 20 to 24 September.
Assembly member Raymond McCartney will address Sinn Féin’s fringe meeting, ‘Towards a United Ireland’, at 1pm at the Arora Hotel, Princess Street, on Sunday, 21 November.
Sinn Féin Assembly members Martina Anderson and Barry McElduff will also be part of the party’s delegation, which will join meetings and events of the Agreed Ireland Forum, the Labour Party Irish Society, the pro-Peace Process group Champ, and the Irish Embassy in London, among others.
• Further information from the Sinn Féin London Office: [email protected]