Tour of plaques in memory of Derry Volunteers 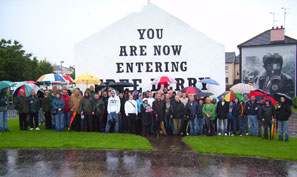 LAST WEEK saw the first ever a tour of the plaques erected by the Derry Republican Graves Association in memory of Volunteers of Briogáid Dhoire Óglaigh na h-Éireann who died on active service in the Bogside / Brandywell  area.
The tour was given by family members, friends and former comrades of the fallen volunteers.
The tour witnessed a large turnout despite atrocious weather conditions. A tree planting ceremony also took place at Westland Street to remember all those young people from the area that died during the conflict. The tour ended with Emer Gallagher, great granddaughter of the Cumann na mBan Volunteer Elizabeth Doherty reading the local Roll of Honour .
The Derry Republican Graves Association has expressed thanks to everyone in whatever capacity who was involved in making the event a success