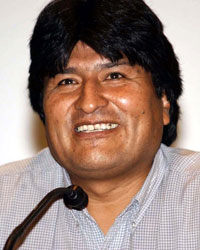 BOLIVIA’S first indigenous president, Aymara Indian Evo Morales, won the recall referendum on his presidency held on 10 August with a massive majority, getting 68 per cent of the vote. The vote is a ringing endorsement for the Morales government’s progressive reforms aimed at overcoming the country’s colonial legacy, which has left the indigenous majority desperately impoverished and excluded.
Following the vote, Morales announced the government will be pursuing its plan to hold a referendum on a new constitution. The opposition has responded to the results with violence, roadblocks and civic stoppages in its eastern strongholds, enforced by armed far-right youth groups. Agribusiness associations in the east have begun organising a “beef boycott”, giving rise to beef shortages in the west.
A civic strike was imposed by militia groups last week that paralysed much of the eastern lowlands and anti-government forces beat up senior police commanders in front of TV cameras. Protests are continuing and Morales has mobilised the military to protect public buildings and institutions, and the nation’s gas and oil fields, all targets of the anti-government protesters. Morales has described the attacks as an attempted “civil coup” by “desperate people”.
Political divisions in Bolivia have deepened since Morales was elected with his Movement Towards Socialism party (MAS) in December 2005 and began asserting the rights of the poor - in the face of a shocked and indignant, mainly white, wealthy minority. Inspired by the Venezuelan example, the government started a process aimed at returning the country’s massive natural gas reserves to public hands. Morales has used the revenue from the re-nationalised gas industry to fund social development including health, education and pension programmes.
While this has brought about a significant improvement in the lives of many Bolivians, the powerful opposition based in the eastern lowlands have fought determinedly to prevent progressive reforms eroding their privileged position, pushing for autonomy from the central government in the resource-rich, industrialised eastern states, or departments.

RACIST HOSTILITY
The opposition organised a series of illegal referenda on autonomy in May and June in the eastern departments of Santa Cruz, Beni, Pando and Tarija. Racist hostility towards the Indian majority has been a key part of their autonomy campaign. Together these four departments account for most of Bolivia’s industry, agribusiness and gas production.
The prefectures, or department governments, are now attempting to withhold gas revenue from the central government, money which is crucial to maintaining the momentum of reforms aimed at overcoming poverty.
The recall referendum, which was on the prefects of Bolivia’s nine departments as well as the presidency and vice-presidency, was initially proposed in the national assembly by MAS last December as a way to break the deepening political deadlock between the government and the opposition but had been blocked by the opposition-controlled senate. A sudden decision on their part to allow the passage of the referendum law in May seemed to be an attempt by the main opposition party in the senate, Podemos, to regain the leadership of the opposition movement from the Santa Cruz-based autonomists.
But the manoeuvre backfired spectacularly on August 10: not only did Morales win a victory more resounding than even the most optimistic of his supporters expected, the opposition also lost two of their prefects to pro-government candidates. At 68 per cent, Morales’s support was 14 per cent higher than when he was elected in 2005.
In his victory speech in La Paz the president declared his determination to continue nationalising natural resources. To cheering crowds he said, “What happened today is important, not only for Bolivians but for all Latin Americans.”
“We are no longer just a simple government, but rather the power of the people”.

NEW CONSTITUTION
The referendum also confirmed four opposition prefects in the eastern provinces. Morales called for a meeting of all the prefects to try to heal divisions and reach a national agreement but talks quickly broke down when the prefects called a shut-down in the eastern departments on August 19. The stoppage was against government plans to divert part of the national direct tax on hydrocarbons towards its proposed Dignity pension for those over 60.
The wealth redistribution and Latin American trade agreements based on mutual solidarity are impacting directly on the eastern elite through the hydrocarbon tax. The eastern prefects are demanding the government return $166 million already raised through the tax, and raise the price of gas exports to Argentina and Brazil.
MAS Congress member Gustavo Torrico said, “The Hydrocarbons tax isn’t a bag of money that we have hidden under the mattress, we’ve distributed it among the country’s senior citizens so they can have an income. This is irreversible.”
Morales’s support base is organising to move forward in the wake of the recall referendum victory with the vote on the proposed new constitution. The social, indigenous and campesino (small farmer) organisations said they would be “closing ranks to defend the government, the unity of the country and the process of change”.
If ratified the new constitution would “refound” the country. Its aim is to empower the indigenous majority by recognising indigenous rights to land and other resources, and by ensuring their increased political participation. It would also provide the firm constitutional basis for increasing public control over the nation’s natural resources.