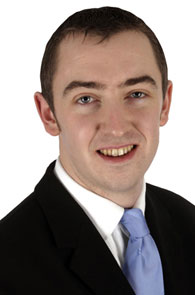 SINN FÉIN North Antrim MLA Daithí McKay has received several complaints from Rasharkin residents who allege that they were threatened by loyalist bandsmen attending a parade in the village on Friday, 22 August.
The North Antrim Sinn Féin MLA and Rasharkin councillor explained:
“Several residents have informed me that when they challenged a number of uniformed bandsmen who were urinating in their gardens they were subjected to a torrent of abusive language and threats against their person. These bandsmen, who were in the predominantly nationalist village at the invitation of Ballymaconnelly Flute Band, warned the residents that they were members of the UVF and that they knew where the residents lived.
“The residents, who were obviously traumatised, are now living in fear of the return of these individuals and are taking the threats and claims of UVF membership seriously, given that many bands attending the parade carried the insignia of both the UVF and UDA.”
He noted that the Parades Commission had placed a determination upon both the parade and its participants. “There was an unacceptable disregard for this by many of the bands and supporters alike.” Several bands played the Sash adjacent to the residents’ protest, in breach of the determination and also stopped to jeer and taunt the protestors.
Acting on residents’ concerns, Daithí McKay said:
“I will be writing a letter of complaint to both the Parades Commission and the PSNI and I will be expecting the latter to forward a file against the host band.”
McKay also alleges that senior PSNI personnel told him that their officers who were deployed to film the bands and their supporters were verbally abused, which again breached the determination as well as the law.
“It is completely unacceptable that self-professed loyalist paramilitaries can be invited into Rasharkin by Ballymaconnelly Flute Band and allowed to threaten and intimidate the nationalist population, with the apparent backing and support of the Democratic Unionist Party.”
An Phoblacht
44 Parnell Sq.
Dublin 1
Ireland