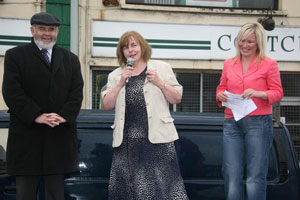 A MEMORIAL stone to commemorate the first of the many street demonstrations of the Civil Rights movement in Ireland was unveiled last weekend in the centre of Coalisland, County Tyrone.
Several hundred people attended the unveiling ceremony on Saturday, 23 August. The event marked the 40th anniversary of the 1968 Civil Rights march from Coalisland to Dungannon.
Speakers at the event were Sinn Féin Mid-Ulster MLA Francie Molloy and Bernadette McAliskey.
Molloy, who was a steward on the 1968 march, said the memorial stone is a tribute to all those who have played a part in the Civil Rights movement in the last four decades.
Around 2,500 took part in the original Civil Rights march from Coalisland to Dungannon, which set in train a series of events that would change Irish politics forever. The march was stopped from entering Dungannon’s Market Square by the RUC.
In the 1960s, nationalists in the Six Counties had begun seeking new ways to highlight the blatant sectarian discrimination they faced. This saw the establishment of the Campaign for Social Justice by Patricia and Conn McCluskey in Dungannon in 1964.
Despite the ban on Sinn Féin, republicans began to emphasise the necessity to campaign openly against injustice in the North. These developments in turn saw the establishment of the Northern Ireland Civil Rights Association (NICRA) in February 1967.

RISE TO THE CHALLENGE
Sinn Féin’s Francie Molloy said:
“Forty years ago, Coalisland was at the birth of the Civil Rights movement. It is fitting that we commemorate the original march in the town. In 1968, there was a huge optimism that here in Ireland we would challenge the corrupt unionist state and bring about real change. Sadly, the Civil Rights movement and its basic demands for housing, jobs and democracy were met with all the violence of the unionist state.
“We now have an opportunity to build a future based on equality and mutual respect.
“In 1968, unionism failed to rise to the demands for change and we have a situation today that again challenges unionism. Unionists know that if they want an Assembly and Executive taking meaningful decisions then they need to share power with republicans in a partnership government of equals. Anything less is not acceptable and anything less will not work.
“There are, of course, still major inequalities across our society. There is a huge crisis in housing and unequal economic development across the North. But these are issues that the Assembly and Executive can deal with if unionism can, unlike 1968, rise to the challenges and demands for equality.”