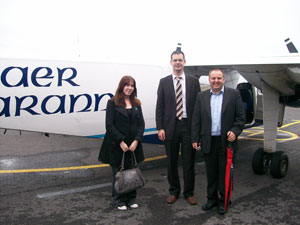 THE Government’s lack of concern about island and west coast communities has been a recurring theme in meetings with job-creation, enterprise, community and youth groups in another series of meetings hosted by Senator Pearse Doherty as part of the Sinn Féin regeneration campaign, The West’s Awake. This stage of the campaign included visits to the islands of Cape Clear, off West Cork, and the Aran island of Inis Mór.
Pearse is compiling a report for the Oireachtas Committee on Community and Gaeltacht Affairs on what is needed to develop the counties along the west coast of Ireland, in economic and social terms”.
In West Cork, Pearse Doherty, accompanied by Clonakilty Councillor Cionnaith Ó Suilleabháin, met a range of local campaigning groups. These included local business associations in Bandon and Skibbereen, a group campaigning for the upgrading of the quays area of Clonakilty, and a special needs education parents’ group.
Pearse Doherty then visited Cape Clear, where he met with the island co-op and visited the Irish-language college.

KERRY, CLARE & GALWAY
In Kerry with County Councillor Toireasa Ferris, he met with the Kerry County Enterprise Board, the County Development Board, North Kerry Together, Kerry LEADER, and the Chamber of Commerce.  Doherty also visited Tralee Institute of Technology, where he met with Shannon Development.
Later he met with the Irish Farmers’ Association regional director in Clare and the Ennis Hospital Action Group.
In Galway, Doherty met with the Galway Chamber of Commerce and Comhdháil Oileáin na hÉireann before flying to Inis Mór. There he met with Comhair Chumann Árann.  He was accompanied by Diane Nolan of Galway Sinn Féin and Councillor Pádraig Mac Lochlainn, a member of the party’s steering group for The West’s Awake campaign.
Speaking after meeting with Cómhdháil na nOileán and Comhar Chumann Árann, Pearse Doherty said:
“It is quite clear that the future of the islands off the west coast does not feature very prominently in the minds of Government policy makers. Each Government minister, when devising policy, must begin to take the unique nature of our islands into consideration if they are to survive.  Just because a policy might be suitable for the mainland does not mean it will be effective on our islands.”
The Sinn Féin senator said that there must be a focus on increasing accessibility to the islands by increasing ferry and plane services which meets the needs of the island communities particularly to the smaller islands. Consideration also needs to be given to the transportation of goods and equipment to and from the islands.
And he emphasised that there also needs to be a drive to attract people to relocate to the islands.
“This obviously means investment in services such as broadband and attracting people who could possibly work from home or establish new businesses and enterprises on the islands.  There must also be a major focus on the promotion of micro enterprises.
“It is time for the Government to take notice of the neglect of our island communities.  The very future of these communities is at stake if proper action is not taken.”

ROSCOMMON & MAYO
Doherty and Mac Lochlainn, accompanied by Roscommon Councillor Michael Mulligan, met with the Western Development Commission and the Border Midlands and Western Regional Authority before travelling to Mayo later on.
In Mayo, a roundtable meeting took place involving a range of community development groups from the county: Quayside Development Project, Westport Youth Activities, Community Transport Initiative, Mayo Community Platform, Age Action, Intercultural Community Platform, The Cove Youth Café, Chamber of Commerce and a Disability Group. The meeting was also attended by Sinn Fein Westport Town Councillor Dave Keating.
During what was a very positive and informative engagement, the community groups  pointed to a lack of support from Government even where they are providing services which should rightly be provided by the state. There was a palpable concern regarding possible future funding cutbacks.

LEITRIM & SLIGO
This stage of Doherty’s tour of the West came to a conclusion with visits to Leitrim and Sligo.  In Leitrim, accompanied by Councillor Martin Kenny, he met with the Leitrim Integrated Development Group, Leitrim Partnership Group, North Leitrim Men’s Group and North Leitrim Community Forum.
Accompanied by Councillors Seán and Chris McManus, he met with Sligo Community Platform and Sligo LEADER.
Doherty said that many of the same issues were brought up time and again over the course of the week as he travelled from West Cork to Sligo. In particular, these included the unacceptable lack of public transport infrastructure in the region, the lack of broadband provision and the fact that people in the region do not enjoy equality of access to public services with those in the rest of the state.
Throughout the week the failings of the Government employment strategy which prioritises gateway towns was evident - smaller towns along the west coast continue to be neglected.  Many of those whom the Sinn Féin representatives met pointed to the need for a new employment strategy that includes initiatives to attract and create jobs in small regional towns.
Further initiatives are planned as part of The West’s Awake campaign over the coming months with Pearse Doherty’s report due to be presented to the Oireachtas Committee on Community Rural and Gaeltacht Affairs at the start of November.