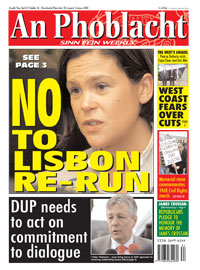 DICK ROCHE, 26-County Minister of State for Europe, was at the centre of a political row this week after he admitted that that, despite the emphatic rejection of the Lisbon Treaty by Irish voters, he wants a second referendum to reverse the decision.
Roche made the controversial comments in an interview with the Irish Independent.
Sinn Féin Dublin MEP Mary Lou McDonald immediately denounced Roche’s remarks as “yet another example of a government without a plan to tackle the political reality that the Lisbon Treaty is finished”.
She continued:
“There is no political crisis, as Minister Roche has suggested. There is simply a political task to be dealt with. The Irish people - like the French and Dutch before them - have rejected this treaty. A new deal now needs to be negotiated. But rather than step up to the job at hand the Irish Government has repeatedly tried to connive a re-running the Lisbon Treaty. Minister Roche’s comments are just the latest in a string of ‘silly season’ kite-flying exercises.
“Minister Roche states his comments are personal. What nonsense! He also states that the Irish cannot simply sit on our hands and keep saying ‘No’. The only people who have sat on their hands since 12 June is the Irish Government and those who supported them in their ‘Yes to Lisbon’ campaign.
“Immediately following the success of the ‘No’ campaign, Sinn Féin sought a meeting with the Taoiseach and submitted to the Irish Government a detailed series of recommended changes to the treaty that reflect the concerns articulated by the people during the campaign.
“We have since published this document, A Better Deal for Ireland and the EU, which addresses issues such as the loss of a permanent commissioner, declining democracy within the EU, the strengthening of key vetoes, the removal of all self-amending clauses, public services and workers’ rights, and a number of aspects of common foreign and defence policies.
“Sinn Féin is the only political party to have produced such a document. The others have chosen instead to spend the passing months finger-pointing and indulging themselves in a blame game.
“These are all practical and deliverable demands. Sinn Féin’s Better Deal document offers the Irish Government a very real way to tackle the political debate it must have with the EU Commission. We would welcome the opportunity to discuss our solid proposals with the Taoiseach in advance of October’s summit.
“It is time the Irish Government stopped trying to circumvent the Irish people and instead knuckled down to the job at hand. The Lisbon Treaty is finished and re-running the proposition for a second time is simply not an option.”
Despite attempts by Government spokespeople to distance themselves from Roche’s remarks, the Europe Minister has not withdrawn them.