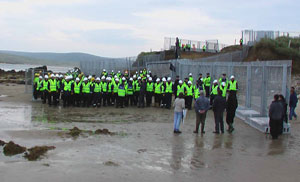 NTIMIDATING: A huge force of security workers employed by Shell confront locals on what is a public beach at Glengad

THE DEPARTMENT of the Environment in the 26 Counties has allowed developers behind the Corrib gas project to construct a key section of onshore pipeline without approval from An Bord Pleanála under the controversial Strategic Infrastructure Act. The Act was opposed in the Dáil by Sinn Féin.
Shell EP Ireland and its consultants, RPS, had previously said that the onshore section of the pipeline project would be submitted to An Bord Pleanála under new fast-tracking legislation.
But Green Party Environment Minister John Gormley’s department has now said that a high-pressure section at the Glengad landfall which runs under Dooncarton mountain, and which saw a landslide just five years ago, and runs across a popular public beach is “exempted” from planning approval under the Planning and Development Act 2000.
The cliff-face at Glengad has already been broken into by the project’s construction team.
The Glengad landfall is within protected habitats under the EU Habitats Directive, encompassing a section which Environment Minister John Gormley ordered Shell consultants to restore last year due to damage to the special area of conservation (SAC).
The company intends to start laying the offshore section of the pipeline very soon.
No review of enabling legislation for the landfall, awarded by former Marine Minister Frank Fahey in 2002, took place after the September 2003 landslide, when heavy rain washed 200,000 cubic metres of debris off Dooncarton Mountain, destroying houses, roads and bridges and washing part of Pollathomas graveyard into the sea.
Erris community group Pobal Chill Chomáin is seeking a halt to the work pending “a rigorous geological survey and examination”, as it says that serious local concerns remain regarding the destabilising effect that continuing works will have on the area.
Green Party Energy Minister Eamon Ryan has been criticised over his handling of the issue by local residents, former Rossport Five spokesman Dr Mark Garavan and Sinn Féin TD Martin Ferris.
Mark Garavan has called on Ryan to “start acting like a minister on the Corrib gas issue, stop hiding behind artificial legal constraints and demonstrate conviction and responsibility on this crucial issue”.
He pointed out that Ryan had “strongly and publicly supported the campaign of north Mayo residents to reconfigure the Corrib gas project to better protect their health and safety” while in opposition; but now, as the minister responsible for the project, Ryan had not responded to recent compromise proposals for the refinery.
Sinn Féin Environment and Natural Resources spokesperson Martin Ferris TD has severely criticised the decision by the Department of the Environment to grant planning permission without approval from An Bord Pleanála.
“When the Strategic Infrastructure Bill was making its way through the Oireachtas I warned that it would be used to push through the Corrib gas pipeline project without proper consultation with the community affected.
“The decision of the Department of the Environment to grant planning permission without approval from An Bord Pleanála to Shell E&P Limited for a key section of the Corrib onshore pipeline at Glengad in County Mayo shows that my concern at the time was fully warranted.
“This decision flies in the face of local democratic accountability and the legislation used to facilitate it was designed for exactly that purpose. I am also aware that former Taoiseach Bertie Ahern first mentioned this legislation after a meeting with Shell E&P who had apparently raised concerns over the planning process here.
“Both Green Party ministers should have the political integrity to stand over their previous positions in relation to the Corrib gas pipeline. While in opposition, both ministers were opposed to the development of an onshore pipeline. However, now that they are in government, they have turned their backs on the people of Mayo and are actively supporting the pipeline. In fact, it was Environment Minister John Gormley’s own department which has by-passed An Bord Pleanála to grant planning permission for this latest phase of the project.
“It is a disgrace that the community has been by-passed in such a manner when such serious concerns around health and safety and the effects on the community have not been addressed.”