Focus should be on new EU Treaty not Lisbon re-run 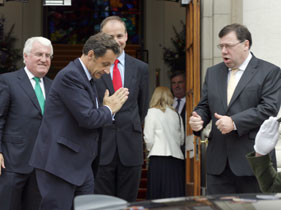 SINN FÉIN Dáil leader Caoimhghín Ó Caoláin has said, that despite media reports, Sinn Féin or, to his knowledge, the other Dáil parties, have not yet received notice of any proposed early Dáil resumption or new Oireachtas Committee to consider the way forward in the wake of the rejection of the Lisbon Treaty. He said that if such a Committee is established it should focus on what should be in a new EU treaty.
He stated, “Despite media reports there has not yet been any official notification of an early Dáil resumption or of the proposed establishment of an Oireachtas Committee to consider the way forward in the aftermath of the rejection of the Lisbon Treaty by the electorate in this State.
“If any such committee is to be established it should not be simply a means of digging the government out of a hole after it failed to convince the people to support the Lisbon Treaty. Nor should it be used as part of a campaign to re-run the referendum. The purpose of any such committee should be to set out terms for a new EU Treaty from the point of view of the Irish people who have given their decisive verdict on Lisbon.
“There is no mystery as to why Lisbon was rejected in this state. The issues include loss of national sovereignty and decision-making powers on key issues, the distance between elitist EU institutions and the people, militarisation and the erosion of Irish neutrality.
“The choice is clear. Either the decision of the people is respected, the Lisbon Treaty is set aside and a new treaty negotiated or the Irish Government, at the behest of the EU elite, re-runs the referendum. There is no half-way house and the Government should not attempt to use the Oireachtas to construct such a half-way house on the shifting sands of political expediency.
“Sinn Féin has set out what we consider should be included in a better deal for Ireland and the EU and we will put forward these proposals in a positive manner in whatever forum is established.”