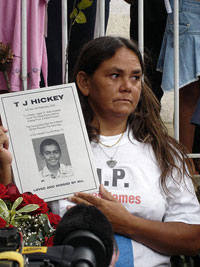 KILLING: Gail Hickey, mother of black teenager TJ Hickey who was killed by police in Sydney

Justice – where the bloody hell are ya?

IN FEBRUARY this year, newly-elected Australian Prime Minister Kevin Rudd did what former conservative PM John Howard refused to for his 11 years in power – he said sorry to the Aboriginal people for the past ‘assimilationist’ practice of removing Aboriginal children from their families.
The apology was broadcast across the nation in schools and parks on ‘Sorry Day’, with thousands gathering on Parliament lawns in Canberra to hear it. Tens of thousands of Aboriginal children – the Stolen Generations – were forcibly taken from their families and put in state institutions or white foster care up until the 1970s.
The Aboriginal community welcomed the apology but have insisted that it’s meaningless if not accompanied by major changes in government policy, including providing compensation for the Stolen Generations and other victims of racist colonial policies; negotiating a Treaty;
Massively increasing funding to deal with the crisis in Indigenous healthcare, education and housing; and reforming the policing and justice system to end institutionalised racism.
The key issue that Aboriginals want Rudd’s Labor government to address is the ongoing government ‘intervention’ into remote Indigenous communities in the Northern Territory (NT), initiated in June 2007 by Howard and continued, even expanded, by Rudd. The intervention, which includes sending the army and more police into these communities under the pretext of preventing child abuse, has been described by Aboriginal leaders as a ‘racist land grab’.

Second-class
The government apology to the Stolen Generations is a welcome step in a society beginning to deal with the legacy of two centuries of dispossession and genocidal policies towards the original inhabitants of the land, who were not enfranchised and considered citizens until 1967. Extreme racism persists.
During the years of Howard’s Thatcherite rule, I went to an ordinary secondary school in south-east Perth. One morning in 1997 we came to school to find that our classmate Priscilla Narkle, a 14-year-old Aboriginal girl, had hanged herself in her bedroom the night before.  The following year, Priscilla’s cousin Clionn Jackman, aged 13 and just starting at our school, tried to break into a residential home.
The homeowners, a white couple, caught him and beat the boy to death.
The judge deplored their racist attitudes and complete lack of remorse when sentencing them to prison.
But there was nothing remarkable about these cases – most Aboriginal youths living in the urban centres of Australia face lives of disadvantage, poverty and racist abuse – with despair, alienation and soaring suicide rates being the natural result. If young men survive their teenage years, they are highly likely to end up in jail for minor offences.

Deaths in custody
Aboriginal areas face shortages in everything except police. The incarceration rate for Indigenous Australians is 12 times higher than the national average, and while Aboriginals comprise 2.4 per cent of the population, they make up more than 20 per cent of prisoners. The majority of Aboriginal women in prison are there for crimes of poverty, such as not paying fines.
On Valentine’s Day in 2004, teenager TJ Hickey was riding his bike to his girlfriend’s house in Sydney’s inner-city Aboriginal suburb Redfern, when police began chasing him in their car – for no reason other than that he was a young black man. In front of witnesses, TJ’s bike was rammed and he was impaled on a metal fence.
The officers called for backup before they called for medical assistance, and the area was flooded with police, sparking a riot as local residents learned what happened. TJ died later that night; the New South Wales government has helped cover up his killing and the police were never charged.
In November 2004, Aboriginal man Mulrunji Doomadgee was brought into the Palm Island watch-house because he was drunk; the Queensland police beat him so badly that his liver was severed in two. They claimed he ‘fell down some stairs’. For the first time ever in January 2007, following a strong campaign for justice, a police officer faced charges for a black death in custody, but he was found not guilty of causing Mulrunji’s death by the all-white jury.
A Royal Commission into Aboriginal Deaths in Custody in 1991 recommended that Indigenous people be imprisoned only as a last resort and called for the decriminalisation of public drunkenness, but none of the report’s 339 recommendations have been implemented. Since the report, more than 200 Aboriginals have died in police custody.

NT invasion
Aboriginals have a life expectancy 17 years younger than the Australian average; this national disgrace is the result of impoverishment, chronic underfunding and lack of community control of health services in rural Indigenous communities.
While John Howard worsened this health crisis with malign neglect for years, he suddenly became concerned for the health and safety of Aboriginal children in the lead-up to the 2007 federal election when he sensed an opportunity to play his trademark wedge politics.
Following the publication of the report Little Children Are Sacred,  which documented the sexual abuse of children in remote Aboriginal communities in the NT, Howard passed the NT intervention legislation in June 2007, unilaterally taking over 60 communities.
Under the legislation, 50 per cent of welfare recipients’ payments are replaced with food ration cards that can only be used at major supermarket chains, alcohol is banned and young people have compulsory medical examinations. Land ownership has been transferred from communal Land Councils to the federal government under five-year ‘leases’.
The Little Children report included 97 proposals to address social problems that can lead to abuse and neglect (housing shortages,  overcrowding, and lack of primary health-care programmes) but none of these have been implemented by Howard or Rudd. While police carried out a ‘military-style’ raid on a remote NT community in April,  arresting 100 people for ‘alcohol offences’, not a single new house or women’s shelter has been built, nor a single new social worker been put on the ground.

Second wave of dispossession
As it specifically singles out Aboriginals, the legislation has required the suspension of the Racial Discrimination Act. It also suspended the NT Land Rights Act.
Thousands of people are fleeing ‘intervened’ communities, resulting in more homelessness and overcrowding in the larger town camps and urban fringes, alarming already-stretched welfare agencies in these towns.  One town camp in Darwin, Bagot, has surged from 500 inhabitants to 1,200.
In a Green Left Weekly article, Aboriginal leader Pat Eatock explained, ‘The voucher system has forced a huge population dispersion throughout the Northern Territory. People are being forced off their traditional land and away from their communities to redeem the vouchers. They end up in town camps ... as the “fringe dwellers” of yesteryear.’
The long battle for land rights and native title – crucial for establishing Aboriginal self-determination – is being rolled back 40 years by this intervention. And it’s just a happy coincidence for the government and mining giants that 75 per cent of Australia’s uranium deposits are found in the NT, most of it on land now affected by the intervention.
Rudd has said he supports the NT intervention as he wants to ‘assimilate’ Aboriginal people as ‘workers, home owners and consumers’. Will a future government be asked to say sorry for the pain caused by this new dispossession taking place under Rudd today?