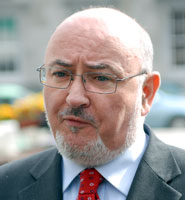 PRIVATE HEALTH insurer Bupa has won an appeal in the 26 County Supreme Court last week that aimed to prevent the introduction of risk equalisation in the private health insurance market.
Sinn Féin Health & Children spokesperson Caoimhghín Ó Caoláin TD said the implications of the decision required an early government response to protect older people but also showed Government health policy is “in tatters” and must be changed fundamentally to a system of universal provision.
He said:
“The Supreme Court decision has huge implications for health insurance and for the whole healthcare system. It strikes down risk equalisation and thus attacks the system of community rating which prevents health insurance companies from exploiting older people and others more likely to fall ill. If the situation is allowed to drift then the old and the sick will be penalised with higher health insurance premiums while the insurance companies focus on the more lucrative end of what, to them, is a market and not a system of healthcare.
“An early Government response is required including legislation if necessary and this should be ready for an early resumption of the Dáil.
“The Supreme Court judgement means that Government health policy is in tatters. That policy is based on the myth that a two-tier public-private system, riddled with inequality, can be regulated to deliver care equitably to all. It cannot be done. Half of our population is paying on the double for healthcare through PAYE/PRSI and expensive personal health insurance. Another section cannot afford insurance and must pay directly for GP visits and medicines. Yet another section of the population qualifies for the medical card but at a very low income threshold that excludes masses of people in need.
“If Minister Harney is sincere in her claim to support equality in health insurance why has she not applied the same principle to the health system in general? The only system that can guarantee both maximum equity and true efficiency is a system of universal healthcare provision, free at the point of delivery and publicly funded. This would be real ‘community rating’ where tax raised based on ability to pay would be used to provide healthcare to all based on need alone.
“Sinn Féin has repeatedly called for the establishment of a Health Funding Commission to assess all the funding, public and private, spent on healthcare and to plan the transition to a universal public healthcare system. Such a change in Government health policy is needed now more than ever.