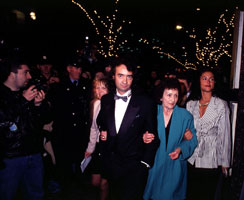 FILM: Sarah Conlon with her son Gerry at the premier of In the Name of the Father in Dublin in 1993. The film exposed the callous treatment of Giueseppe Conlon in a British prison

MEMORIES of the British judicial system’s brutal treatment of Irish people came into sharp focus again this week with news of the death of Sarah Conlon.
Described as “a woman with no political interest” Sarah Conlon’s life had been turned upside-down in 1974 after members of her family were arrested, framed and imprisoned for life in a conspiracy which involved British policemen, forensic scientists, the judiciary and successive British governments.
Sarah’s son Gerry Conlon was one of four people arrested and charged in connection with the IRA’s bombing of pubs frequented by British soldiers in Guildford and Woolwich. Her husband Giuseppe was arrested and charged after he travelled to England to organise legal representation for his son.
Along with Giuseppe, Gerry Conlon’s aunt, Annie Maguire, her husband Paddy and their family were also arrested and charged. The Maguire Seven were convicted on the basis of dubious forensic evidence whose efficacy was questioned from the outset and was later exposed as fraudulent.
Sarah’s husband, Giuseppe, was convicted and sentenced to 12 years imprisonment after it was claimed that he helped to make bombs in the London home of his sister-in-law. Her son, Gerry was convicted and sentenced to life imprisonment.
Her sister Anne and brother-in-law Paddy were convicted and sentenced to 14 years imprisonment. Sarah’s nephew Vincent was jailed for five years and another nephew Pat was also detained as a juvenile.
Within months six more Irish people were being held by British police on trumped up charges following two bomb attacks in Birmingham. All six were convicted and sentenced to life imprisonment.
The methods employed to secure the convictions included media vilification, brutal interrogations, forced confessions and fabricated forensic ‘evidence’. Vital information was also withheld from the defence.
The Guildford Four, Maguire Seven and Birmingham Six became the victims of a British state determined to extract revenge for an IRA bombing campaign in Britain. Those arrested and charged were not only innocent but widely known to be innocent within the Irish community.
Their subsequent conviction was not only intended to strike fear into the heart of the Irish community living in Britain but also to ensure their silence in the face of ongoing atrocities being carried out by British soldiers in Ireland.
In this sense, while the Guildford Four, Maguires and Birmingham Six were neither republicans nor members of the IRA, they were inadvertently Irish political prisoners. All had been targeted because they were Irish or in the case of Carole Richardson because of an Irish connection, while the nature of their convictions met a specific political agenda.
From the outset there were glaring anomalies in the convictions but despite this the British judicial system refused to contemplate any notion that those convicted were innocent.
In 1980 Britain’s Lord Denning dismissed an appeal by the Birmingham Six on the grounds that to concede that the British police or courts had got it wrong would amount to “an appalling vista”. The appalling vista shunned by Judge Denning was in fact the terrible truth that all were innocent and all had been deliberately framed.
In the case of the Guildford Four, confirmation of their innocence emerged within months of their trial. In December 1975 an IRA unit captured in London’s Balcombe Street announced their responsibility for the Guildford bombings.
By the time of their appeal in 1977, it was becoming increasingly clear, based on declarations by the IRA unit backed up by further forensic evidence, that the Guildford Four were innocent. Furthermore, if the Four were innocent so were their alleged “accomplices” the Maguire Seven.
But the nature of the convictions were political not evidential and the British were keen to keep any emerging information that indicted their captives’ innocence under wraps. Forensic evidence was suppressed by the British Director of Public Prosecutions who, according to defence lawyers, “took the decision to disguise, bury and hide all forensic links to that linked Balcombe Street to Guildford and Woolwich bombings”.
During the appeal a trio of judges conceded that members of the IRA unit had been responsible for the bombing but insisted that the Guildford four were also guilty. They dismissed the IRA’s evidence as “a skillful and cunning plot to get the others off”.
And brutality at the hands of British interrogators, the manipulation of evidence and the indifference of British courts wasn’t the only injustice faced by the Conlon-Maguire family and their co-accused.
In jail they were often singled out for brutal treatment. Paul Hill one of the Guildford Four spent 1,462 days of his fourteen year sentence in solitary confinement.
Giuseppe Conlon suffered from tuberculosis and emphysema but was denied medical treatment while he was in jail. He died in prison in January 1980 at the age of 56. The callous treatment of Giuseppe was subsequently exposed in the film In the name of the Father.
International attention secured by years of campaigning finally forced the British state to run for cover by declaring a litany of “miscarriages of justice”. The notion of a judicial mistake masked the political nature of the injustice inflicted on those who had been selected as convenient scapegoats.
Rather than risk an embarrassing full Court of Appeal hearing, the convictions against the Guildford Four were swiftly quashed in October 1989. Emerging from the steps of London’s Old Bailey to greet the world media, Gerry Conlon famously announced “I served 15 years for a crime I did not commit”.
In March 1991 the convictions against the Birmingham Six were quashed and three months later the British Court of Appeal finally overturned the convictions of the Maguire family. By this time the surviving six of the original seven had already completed their sentences.
Speaking shortly after his mother Sarah’s death, Gerry Conlon described her steadfastness in the face of adversity.
“For a woman with no political interest to be suddenly challenging the British Government and British judiciary, it must have been daunting at times but she quietly went about with great dignity telling people what had happened to me and my father and the others,” said Gerry.