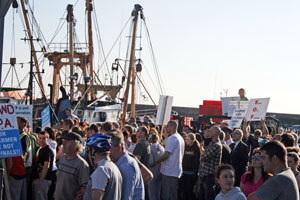 Supporters of the crew on board the Emer Jane, Kilmore Quay, Tuesday

TENSIONS were high on Kilmore Quay, County Wexford on Tuesday evening as hundreds of people gathered to welcome back fishing trawler The Emer Jane. It had been reported earlier that a 26 County naval vessel had threatened to fire across the bows of the fishing boat, an action described by Wexford Sinn Féin Chairperson Seamie Davitt as “an outrageous and disproportionate response” to the refusal of the crew to allow the navy to board the boat.
“Irelands fishing industry is on its knees. It is being regulated and policed out of existence by the Government and its security apparatus. Threatening to open fire on any Irish fishing vessel is completely unacceptable.
“It is clear that the EU regulations that govern the fishing industry are used more stringently and harshly against the Irish fishing fleet than non-Irish boats operating legally and illegally in Irish waters. “The Irish Government and its resources would be better spent renegotiating a proper and fair deal for Irish fishing communities and eliminating from Irish waters all illegal fishing than criminalising Irish fishermen and forcing them to dump perfectly good fish at sea. The current regime that governs fishing needs to be overhauled immediately.
The Naval Service has denied reports that the Emer Jane’s skipper, Paul Furlong received such threats after he refused to go under arrest to the port of Dunmore.
With the full backing of the owner of the trawler, Michael O’Flaherty, Paul Furlong refused the order and insisted that the vessel was returning to Kilmore Quay. One of the Navy members tried to take the wheel but the skipper refused to hand over, even though he was warned that this would lead to additional charges being brought.
The vessel berthed in Kilmore Quay on Tuesday night following its detention by the patrol ship for the alleged offence, supporters of the fishermen said, of having been found by two members the naval vessel to be two bags of scallops above the allowed quota.
As the vessel sailed in to Kilmore Quay a large crowd cheered and applauded, and vans and machinery sounded their horns. Many of the crowd carried placards which said ‘Decommission the CFP (Common Fisheries Policy) Not the Fishermen’, ‘Navy arrest boat for two boxes of scallops while foreign vessels are allowed to clean out our waters’ and ‘Our Fishermen are Not Criminals – the 3rd World Starves while we throw fish back’
Sinn Féin Councillors Maurice Roche, John Dwyer and Anthony Kelly were present for the docking of the vessel. Sinn Féin recently had a motion passed at County Council level calling for aid for the fishermen and other fuel dependent industries.  He spoke to Michael O’Flaherty owner of the vessel who was overwhelmed by the show of support that the fishermen had received. O’Flaherty described the latest incident as the straw that broke the camel’s back.
“This is not the first time that we have been arrested” he said, “but usually when vessels are told to pull in and follow, usually all the way back to Cork, they acquiesce. This time was different. We had had enough and Paul just refused.  One of the Navy men tried to steer her towards Dunmore, but the Skipper took back the wheel and said ‘I am in charge of this vessel. We’re going home to Kilmore’.”
O’Flaherty spoke of occasions when he had been steamed under arrest in his 23 meter vessels all the way to Cork at the behest of the officials to endure 48 hours of detention for the sake of a few kilos of fish, while the French and Spanish trawl Irish waters in 40-meter boats and are never inspected. He said that their log-sheets are never even read.
O’Flaherty traced the current problems back to Dr. Noel Cawley’s review group which recommended that the Irish fishing fleet was too large to fish the EU quotas allowed to Irish fishermen and that the fleet needed to be cut. On foot of this a deal was struck with the EU to pay fishermen to decommission their trawlers. Fishing crews were left without a livelihood, with many not even qualifying for social welfare payments.
“It would have made more sense for the Government to go back to the EU and fight for a fairer quota for Irish fishermen. We are being criminalised for protecting our livelihood and that of our employees while our waters are plundered by overseas fishermen who are unaccountable”, O’Flaherty said.
“The current system is anti-conservationist. It is a moral disaster to be throwing dead fish back into the sea when there are millions starving in the world and the fishing industry is on it’s knees.  While our fishermen are throwing these fish into the sea, Ireland regularly imports fish from Iceland to keep up to the consumer demand – where is the sense in this?”, he asked.
There are six vessels currently in Kilmore Quay which are up for decommissioning – three within the next week. The fishermen do not wish to decommission, but say between spiralling fuel costs and inadequate quotas, they don’t have any choice.
Sinn Féin in Wexford says that this will mean a loss of €6 million of the South Wexford economy when the knock on effect beyond the fishermen such as local restaurants, fishmongers, consumers, van drivers is taken into account and on and on.
The Sea-Fisheries Protection Authority (SFPA) is said to have about 90 officers to cover inspections of the 270 Irish Trawlers while fishing communities complain that Spanish and French vessels fish Irish waters unhindered.
The defeat of the Lisbon Treaty is seen being a catalyst for this sector of the community to stand up and be counted.