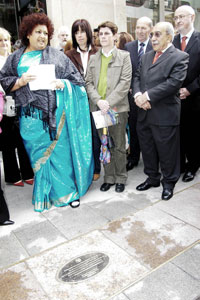 Sinn Féin TD for Cavan-Monaghan and Dáil group leader Caoimhghín Ó Caoláin attended a 24th anniversary event on Wednesday marking the beginning of the anti-apartheid boycott by Dunnes Stores workers in 1984.
A plaque was unveiled at the event attended by South African Government Minister Kadar Asmal, the South African Ambassador to Ireland, representatives of the Irish Government and anti-apartheid campaigners.
Speaking at the event Caoimhghín Ó Caoláin said:
“Sinn Féin along with progressive voices from across Ireland and indeed the world applauded the workers of Dunnes Stores when they commenced their boycott of South African goods in 1984.
“Ten brave young women and one young man, members of the MANDATE trade union, refused to handle South African goods in Dunnes Stores’ Henry Street branch, choosing instead to strike in opposition to the stocking of the goods. They walked the picket line in support of their union’s policy of solidarity with the anti-apartheid struggle and of boycotting South African products. It only ended when the government agreed to ban the import of South African produce until the apartheid regime was removed.
“The Dunnes boycott inspired people not only in Ireland but across the world, and gave hope and solidarity to the majority population in South Africa seeking democracy, equality and freedom.
“It is right that we should pay tribute to these inspirational campaigners who played a small but vital role in ensuring that Ireland played its part in the campaign to bring democracy to South Africa.”
An Phoblacht
44 Parnell Sq.
Dublin 1
Ireland