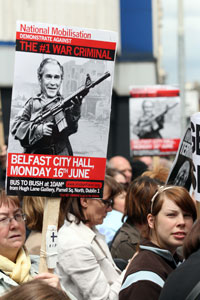 CLEAR MESSAGE: : Anger at US policy in Middle East demonstrated in Belfast

THE visit by US President George W Bush to the North on Monday saw Ógra Shinn Féin mobilise activists from across Ireland for a protest against US imperialism at Belfast City Hall.
Over 100 republican activists, including Sinn Féin MLAs and councillors, marched with banners and posters from the party’s Sevastopol Street Office to merge with the joint protest at Belfast City Hall.
Sinn Féin deputy First Minister Martin McGuinness met Bush during his visit and raised Sinn Féin’s objections and concerns over the ongoing occupations of Iraq and Afghanistan.
Speaking prior to meeting Bush, Martin McGuinness said:
“Successive US administrations, including President Bush’s, have contributed to advancing the Irish Peace Process.
“As with previous presidential visits, there is an opportunity presented to deal with other issues of concern to people living here.
“President Bush is aware that we have serious reservations relating to US foreign policy, particularly the invasion and occupation of Iraq, and we will be raising this directly with the president.
“When the former First Minister and I met with President Bush, I took the opportunity to discuss our experiences of conflict resolution and my work with groups from Iraq.
“Late last year, I raised the ongoing and unresolved issue of the undocumented Irish directly with President Bush and I am keen to continue this dialogue.”

CLEAR MESSAGE
At the anti-Bush protest in Belfast, Ógra Shinn Féin National Organiser Barry McColgan said:
“A loud and clear message was sent out to George Bush and the world that Ireland rejects imperialism. Ógra Shinn Féin calls for imperialists out of Iraq and Afghanistan but also out of our own country.
“Hundreds of people mobilised today, demonstrating their anger at US foreign policy but also in strong solidarity with peoples brutally oppressed by US tyranny.
“The protest and demands we vocally aired today must continue to be highlighted in Ireland and across the world to resonate and put pressure on the incoming US president to end these unpopular, murderous and illegal occupations of Iraq and Afghanistan.”

• For video of the protest see https://www.youtube.com/watch?v=d_sVC3GQ5C4
An Phoblacht
44 Parnell Sq.
Dublin 1
Ireland