25th Anniversary of Great Escape to be celebrated in West Belfast 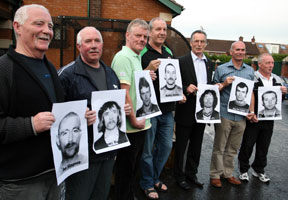 People from all over Belfast and beyond will gather in the Whiterock Leisure Centre this Saturday, 21 June at 7pm for the Great Escape 25th anniversary night.
In September 1983 the gates of Long Kesh prison flew open and 38 Irish republicans escaped in the largest breakout in history from a British jail.
A massive blow had been struck by the IRA against the British Government and its leader, Margaret Thatcher.
On the Falls Road, the slogan writers were out of the traps quicker than the escapees with slogans such as ‘open up the Long Kesh gates – meals on wheels for 38’ and ‘three dozen and two all out for stew’ appearing on gable walls.
Republicans all over Ireland rejoiced and morale was lifted again, particularly after the harrowing period of the hunger strikes.
Nineteen of the escapees were from west Belfast and many of those who were central to the planning of the escape and who formed part of the ‘rearguard’ were also from the west.
Many of the escapees will be present at the event on Saturday night as will many of those involved in the planning of the escape and those who took part in the ‘rearguard’ who stayed behind to ensure the escapees got away.
The event in Whiterock Leisure Centre will also include the untold stories of the escape and will acknowledge, for the first time, the contributions of many republicans who played their part in the breakout.
The role of Larry Marley, who was central to the planning of the escape, will also be elaborated on at the event.
Larry, from Ardoyne in north Belfast, was assassinated by loyalists in April 1987, and is a legendary figure among republicans for his extraordinary ability to plan escapes.
There will be many serious and intriguing stories told on the night. There will be stories of the heroics and the bravery of all of those involved in the IRA operation to escape. There will also be plenty of humorous anecdotes and some of these will be at the expense of the escapees.

football match
West Belfast republican Jim ‘Jaz’ McCann, one of the escapees, spoke about the last football match between the prisoners before the escape:
“The Saturday morning football match was the main event of the week and was renowned for its fierce competitiveness.
“The screw who refereed the match the day before the escape said afterwards as we walked off the pitch ‘that was the mildest game of football I’ve ever seen’.
“What he didn’t realise was that nobody wanted to get injured in case they missed the escape. Joe Simpson remarked to me that the toughest tacklers in the jail had turned into ballet dancers!” said Jaz.
In the Whiterock leisure centre on Saturday night you can find out which escapee who lives in Lenadoon and whose first name is Harry did a count after leaving the Tally Lodge and announced there was one person short only to laugh his head off when he discovered that he had forgotten to count himself!
You can also find out which escapee handed out his entire stash of marshmallows and chocolate biscuits to other prisoners the night before the escape; and this is after being warned to behave normally by a leading Belfast republican.
The escape from H7 is the greatest escape story ever told and Saturday evening will see the stories being told by those who were involved.
It promises to be a powerful night and is definitely one not to be missed Special presentations will be made on the night. There will be entertainment after the escape story has been told.
Doors open at 7pm and there will be a full bar. Everyone is welcome and you can pay at the door.
An Phoblacht
44 Parnell Sq.
Dublin 1
Ireland