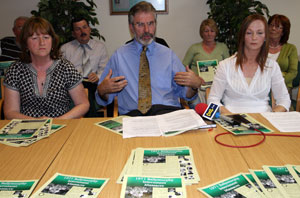 FAMILIES bereaved as a result of the British Army massacre in Ballymurphy during the introduction of internment in 1971 were joined by West Belfast MP Gerry Adams to launch a campaign leaflet on Wednesday.
Briege Voyle the daughter of mother of eight Joan Connolly, who was killed in the massacre explained the purpose of the event:
“Since the deaths of the 11 people killed by the Parachute Regiment in Ballymurphy on 9 August 1971 we have felt overlooked and forgotten.
“Over the past year we have been meeting with different parties and groups to raise our experiences and need for an independent investigation and acknowledgement from the British Government of the innocence of our loved ones and the hurt and pain their killings caused to all of us.
“A key part of this has been seeking acknowledgement in our own community. It has been clear that through no one’s fault that there are many who simply don’t even know what happened.
“This leaflet explains clearly the sequence of events and what the families need in order to begin a process of recovery and healing.
“Our MP Gerry Adams has kindly agreed to assist us with launching this leaflet in order to demonstrate that these issues remain outstanding and must be addressed politically in this year of examination of how we deal with our collective past.
“This follows on the heels of the massacre being raised by Fine Gael leader Enda Kenny in the Dáil at An Taoiseach’s question time and very positive meetings with the SDLP and the DUP. In addition to our own MP we are hoping to have all political parties supporting our quest to have the names of our loved ones cleared.”
Wednesday press conference heard a statement read on behalf of all of the families by Carmel Quinn, sister of John Laverty and the Terry Laverty  – who was wrongly convicted of riotous behaviour and sentenced to six months in jail as part of the cover up of his brother’s killing.
Alice Harper the eldest daughter of Danny Teggart read a statement from supporters in England who the group met while on a speaking tour in January.