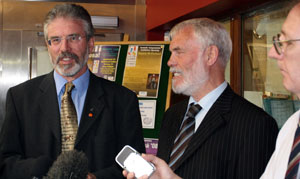 ANNOUNCEMENT: Sinn Féin’s Gerry Adams and Francie Brolly MLA give a media briefing on the £6 million boost for the Irish Language Broadcast Fund

MAJOR new finance will be available to continue funding of the North’s Irish Language Broadcast Fund (ILBF) when it expires in March 2009 following intense representations by Sinn Féin to the British Government, Gerry Adams has revealed.
The aim of the fund is to deliver at least 75 additional hours of Irish-language broadcasting a year to a weekly audience of 25,000 people across the Six Counties and throughout the island of Ireland.
Gerry Adams said:
“The British Government has committed to providing an additional £6 million expressly for the Irish Language Broadcast Fund when the current funding runs out next March. This new funding will cover the ILBF for a further two years.”
The Irish Language Broadcast Fund was first announced in the Good Friday Agreement but it wasn’t until 2004 that Sinn Féin secured a £12 million budget to cover the period from 2005 to 2009.
The Irish Language Broadcast Fund has been enormously successful and has fostered close links with broadcasters throughout Ireland. It has effectively delivered quality Irish-language programming.
Praising the work of the ILBF, Adams said:
“The failure of the former Culture Minister to plan for the future development of the fund meant that it was at risk of ending next March. The funding secured from the British Government protects the future of the ILBF for the next two years.
“Of course, this is only one aspect of the efforts to ensure that the rights and entitlements of Irish-language speakers are respected.
“Campaigning will continue to achieve an Irish Language Act.”

75 ADDITIONAL HOURS
In 2004, the British Government announced the establishment of a fund to provide financial support for Irish-language film and television production in the North, now known as the Irish Language Broadcast Fund.
The aim of the fund is to deliver at least 75 additional hours of Irish language broadcasting per annum to a weekly audience of 25,000 people by 2008. The Department of Culture, Arts and Leisure (DCAL) agreed funding to the ILBF of £12 million to cover the four-year period until March 2009.
Results from an interim evaluation of the ILBF, carried out by Deloitte were very positive towards the fund.
In particular, the ILBF has exceeded its original target of creating 75 hours a year of new additional Irish-language programming.
The fund has been successful in funding 180 hours of programming in the financial years 2005/6 and 2006/7. Through extrapolation of figures, the evaluation also reveals that the target audience figure of 25,000 is being met.
The ILBF has fostered close links with TG4, RTÉ and the BBC and is now viewed by broadcasters as a vital resource to the provision of quality Irish-language programming in the North of Ireland.
The ILBF has funded a wide variety of programming and places particular importance on children’s and young people’s programmes since this is where the growth lies in terms of Irish-language speakers.

INDEPENDENT PRODUCTION
Fostering an independent production sector for Irish-language programming is also a priority of the fund and company turnover in this sector has increased significantly over the year as a result of the ILBF’s investment in the sector.
The ILBF has successfully delivered a range of training programmes in line with the needs of the sector. The ILBF’s flagship New Entrant Scheme has been a huge success.
The ILBF has organised a number of group courses and workshops in script writing and in script adaptation for reversioning animation into Irish.
In addition, the fund provides bursaries to Irish-language speakers working in the industry to attend short-term training courses with recognised training providers and to attend the MA in Film & TV Management at the University of Ulster in Coleraine.