The people have spoken - now it's time for Plan B 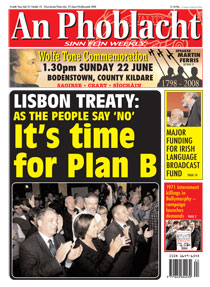 THE PEOPLE have spoken. The Lisbon Treaty is dead. Now it’s time for Plan B. While some treaty advocates have reacted by blaming the electorate for rejecting it, reasonable voices have been more positive. There is no crisis. The 26 Counties is not going to be ejected from European Union. It will continue to be at its heart. Importantly, its political leaders are indicating that it’s time to listen, reflect and engage.
It is hard to see how these sentiments are compatible with continuing the ratification process. When France and the Netherlands rejected the EU constitution in 2005, the ratification process was brought to an end. So it should be with Lisbon.
A clear signal must be sent from the Irish Government to the electorate that, despite its support for the treaty, it will now argue for a completely new one, reflective of the core concerns that provoked almost one million people to reject the Lisbon Treaty last week.
In the referendum campaign Sinn Féin argued that the Lisbon Treaty was a bad deal and that a better deal was possible. Our argument was based on our analysis of the treaty and on the fact that in 2005, two of the founding members of the European Union, France and the Netherlands, rejected the same package.
We focused on three sets of concerns.
Sinn Féin said the Lisbon Treaty would deepen the democratic deficit by removing Ireland’s permanent commissioner, reducing our voting strength at council, removing or weakening key strategic vetoes, such as on taxation and international trade, and by giving the European Council the power to amend the fundamental laws of the union. That the treaty was written and presented in an unintelligible form added an information deficit to the democratic deficit.
Our party argued that as well as taking the EU further down the road of developing common foreign and defence policies, Lisbon would promote militarisation and undermine the state’s neutrality.
We were also very concerned that the treaty was designed to further open up vital public services such as health and education to competition and privatisation. This would have been complemented by the removal of key vetoes on the inclusion of health, education and social services in international trade agreements.
Our party also voiced major disappointment with the failure of the treaty drafters to address workers’ rights and the a trend towards social dumping, aided and abetted by the European Court of Justice.
We highlighted the treaty’s negative impact on the developing world and Ireland’s continued involvement in the European Atomic Energy Community.
The referendum campaign is now over and the verdict of the people is clear. I welcome Fine Gael and Labour’s promise not to seek a second referendum and I am calling on the Government to do likewise.
However, the most important task is to ensure that the better deal that the people voted for is secured. While the primary responsibility lies with the Irish Government, there is a responsibility on those of us who argued against the treaty to detail what we believe such a deal would consist of. We must also support the Government in achieving the best possible outcome of any future negotiations.
I would encourage all sectors, whatever their position, to grasp this opportunity and work with the rest of us. This week Sinn Féin submitted to the Government a detailed position paper outlining proposed changes to the Lisbon Treaty. Sinn Féin is arguing for:

•     The retention of a permanent commissioner for all member states;
•     The retention of the Nice Treaty formulae for qualified majority voting;
•     The removal of all eight self-amending articles including the simplified revision procedure in Article 48;
•     The removal of Article 46a giving the EU a single legal personality;
•     A strengthened protocol on the role of member state parliaments;
•     A significantly expanded protocol on the principles of subsidiarity and proportionality including the aims and values of the EU;
•     Substantial amendments to aspects of the Common Foreign and Security Policy;
•     Substantial amendments to the section of Common Defence and Security Policy;
•      A new protocol on neutrality;
•      A strengthened social clause;
•      A substantially revised protocol on vital public services;
•      Amendments to articles dealing with public services and state aid;
•     The inclusion of the European Trade Union Confederation Social Progress Clause to protect workers’ rights;
•      A protocol on Irish tax sovereignty;
•      Substantial amendments on Article 188 dealing with international trade agreements including a cast-iron veto on mixed World Trade Organisation agreements;
•     A new protocol ending Ireland’s participation in the European Atomic Energy Community;
•      A series of amendments to Articles 10 and 188 promoting the needs of the developing world in the context of international trade.
Sinn Féin’s agenda for the future of the EU is much broader and deeper than this list of demands. These are, in our opinion, modest and achievable. They represent the detail of the better deal we argued for during the referendum campaign and also what we believe to be the minimum changes required for any new treaty to be acceptable to the electorate.
Of course the Government will say that this list is too ambitious, too detailed and undeliverable. But we have already heard a range of voices across the EU, in governments, opposition parties and social movements, supporting some or all of the above. Smaller member states are interested in Sinn Féin’s proposals on the commission and council. Trade unions and social movements are supportive of our position on workers’ rights and public services. And the anti-war movement is ready to mobilise on the issues that resonate with them.
The question now is whether the Irish Government has the political will and courage to give voice to the concerns of the electorate as expressed in last week’s referendum.
Politics is the art of the possible. When entering any negotiation one must be both ambitious and realistic. Crucially, maximum support, both domestically and in other member states, must be mobilized to secure the best outcome. Sinn Féin is ready to play its part constructively. We believe many others are willing to do likewise.
All eyes are now on the Government. Will they listen to the people and work to secure a better deal for Ireland and the EU? Or will they collude with those forces in the EU who seem unwilling to respect referendum results in Ireland, France and the Netherlands? The first option will strengthen Ireland, our place in the EU and the union itself. The second will deal a new blow to the democratic credibility of an already faltering EU.