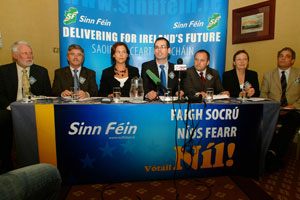 ALL TO PLAY FOR: Growing support for sending government back with strong mandate for new negotiations

•     Secure a permanent Irish EU Commissioner.
•     Copperfasten key strategic vetoes on public services, taxation & international trade.
•     Stop Irish rates of pay and conditions being undercut
•     Secure a specific article protecting Irish neutrality and oppose the imposition of increased military spending.
•     Stop using Irish taxpayers’ money to fund the nuclear industry.
•     Maintain the absolute right of Irish citizens to have the final say in any significant change to EU treaties.
On the issue of securing a better deal Sinn Féin President Gerry Adams pointed out that there is vast political experience in Ireland when it comes to negotiations.
“The Irish people know that it is possible to secure a better deal but it will only happen if the electorate vote ‘No’ and give the government a strong mandate.
“Ireland is the only place in the European Union to have a vote on the Lisbon Treaty but there are tens of millions of people across the EU who have been denied a vote and who oppose this Treaty.
“The fact is that the Lisbon Treaty cannot proceed without the support of the Irish people so if it does not go through it will have to be re-negotiated.  He criticised the government and other parties for their scaremongering and appealed for them to engage in a proper debate for the remaining days of the campaign.
“Sinn Féin is asking voters to come to this debate in a calm and reasoned way, to listen to the arguments being put forward by both sides and to make up their mind in a reasoned way.
“A strong ‘No’ vote on 12 June would create a huge opportunity for the Irish government to address those issues which are clearly of concern to the public”, Adams said.