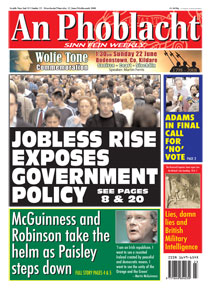 The most significant news this week, apart from the Lisbon Treaty referendum, was undoubtedly the alarming rise in the numbers unemployed in the 26 Counties. From January to May 2008 the number of unemployed people claiming benefit rose by almost 48,000. This was a rise of 31% and the biggest increase since records began in 1967.
Unemployment now stands at over 200,000 for the first time in nearly a decade. This is 5.4% in the 26 Counties. It should be pointed out that while the actual number unemployed is reaching the level of the 1980s the working population is far bigger so that the percentage rate is lower. Nonetheless this is a very serious situation and an indicator of fundamental flaws in the economy for which successive governments since the mid-1990s bear full responsibility.
Those who have advocated a ‘Yes’ vote on Lisbon threatened voters with the prospect of widespread job losses. This threat was deeply insulting to those who lost their jobs over the last twelve months while the government failed to take any action whatsoever to protect vulnerable workers and to create alternative employment. If jobs continue to be lost in the months ahead it will have nothing to do with how we voted in the referendum.  It will be the result of government inaction.
A great proportion of the numbers joining the dole queue have come from the construction industry. A slowdown in that industry was inevitable. Simply put there are only so many houses that can be built. But the decline in construction has been made far worse by the wreckless policies pursued by Fianna Fáil-led governments. They have placed far too much reliance on construction, and in particular the private speculative housing market, for economic growth.
This was bad policy on two counts. Firstly, it failed to meet housing needs equitably with tens of thousands of people left on local authority waiting lists for accommodation and low to middle income families unable to afford homes or else saddled with massive mortgages. Secondly, it was bad employment policy because it has left masses of young workers unprepared for employment in other sectors.
There is now a whole sector of people in their late 20s and early 30s who left school a decade ago and went into relatively well-paid jobs in construction during the boom years and have not known unemployment since. They are now experiencing the first shock of joblessness. Many of them are now heavily indebted thanks to the policy of easy credit. The real winners in the boom years were the biggest property speculators and developers and the rapacious financial institutions.
This requires a major change in government policy. Workers must be re-trained. Local authorities must be financed to construct social and affordable housing, including the completion of the long-promised housing redevelopments in Dublin city which have been scuppered by the pull-out of McNamara’s from the ill-advised public-private partnership projects in Dublin city.
The new Taoiseach Brian Cowen recently announced the ending of the Fianna Fáil tent at the Galway Races. The party’s developer friends were wined and dined there for the past decade. But their interests still dictate government policy. This week’s jobless figures show the long-term consequences of handing the Irish economy over to them. It must be reclaimed.

AS unemployment figures in the 26 Counties rocket upwards with the largest annual increase ever recorded, Sinn Féin TD and Enterprise, Trade and Employment Spokesperson Arthur Morgan has called on the Government to start taking action to counter the increase.
Morgan said the Government’s response to date had been inadequate and that it needs to consult all the parties as well as meeting with unemployment and business groups to come up with a joint solution.
“I want the Minister for Enterprise, Trade and Employment Mary Coughlan to come before the Committee to discuss the rising rate of unemployment and what measures the Government is taking to address this matter and the needs of those affected. I have also proposed that groups such as the Irish National Organisation of the Unemployed, FÁS and Enterprise Ireland be invited to outline their current priorities and work programmes”, Morgan said.
“The fact that the Live Register has exceeded 200,000 for the first time since 1999 demands that examination of these issues should be put to the top of the agenda for this Government. They sold themselves to the electorate last May as the only parties who could sustain the economy and that lie has now been revealed for what it was. They do however have the opportunity to turn around this turn of events if they make a concerted effort with all the political parties and other interested groups to get our economy back on track”, he said.