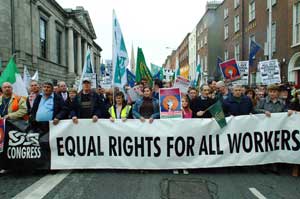 IRISH FERRIES: The ‘race to the bottom’ will be accelerated by the Lisbon Treaty

THE Executive Council of the Irish Congress of Trade Unions, which represents more than 600,000 workers, has voted to support the campaign for a ‘Yes’ vote on the Lisbon Treaty referendum. Leaders of ICTU, including its president, David Begg, have claimed that the treaty will be a step forward for workers’ rights as the Charter of Fundamental Rights seemingly enshrines the right to strike. Some of the individual unions affiliated to the ICTU are calling for a ‘No’ vote, including Unite, one of Congress’s largest affiliates. The Technical, Engineering and Electrical Union (TEEU) is recommending its 45,000 members vote ‘No’, and the Services, Industrial, Professional and Technical Union (SIPTU), representing more than 200,000 workers, has said it will not support the Lisbon Treaty unless the Irish Government commits to legislating for collective bargaining for workers.

NO RIGHT TO STRIKE
Even a cursory glance at the text of the treaty shows the claim that it provides new protection for workers’ rights to be false.
While Article 28 states that workers may “take collective action to defend their interests, including strike action”, it immediately qualifies this “fundamental right” by explaining that “the limits for the exercise of collective action, including strike action, come under national laws and practices”.
The British Government is clearly satisfied that the treaty’s charter does not grant the right to strike. The British Trade Unionists Against the EU Constitution pamphlet, The Big EU Con Trick, quotes a British Foreign Office spokesperson as saying explicitly: “The charter doesn’t create any new rights. We spent a very long time looking at this, in particular the disputed article. It does not create the right to strike.”
Lisbon pits the “fundamental right” of workers to take collective action against the apparently even more fundamental right of capital to unrestricted movement, unbound by the national industrial laws, agreements and standards of the host countries.
Conflicting rights of employers and workers will be ruled on by a strengthened European Court of Justice (ECJ). The European Trade Union Confederation has described several recent ECJ rulings as “an open invitation to social dumping”, launching a race to the bottom for workers’ wages, conditions and rights.

RACE TO THE BOTTOM

Some of the recent ECJ rulings on disputes include:–

German company Objekt und Bauregie employed a Polish sub-contractor to employ Polish building workers, posted to Germany, on less than half the minimum wage agreed by German trade unions and employer associations.
On 3 April, the ECJ ruled that O&B should not be bound by the local Lower Saxony law that states public building contractors must abide by the existing collective agreements. The court found that while member states may impose minimum pay rates on foreign companies posting workers in their state, the local law restricted the “freedom to provide services” and was not justified by the aim of protecting the workers because workers in the private sector were not covered by such protections! In essence, this ruling outlaws above-minimum wages and conditions being included in public tender contracts.

In 2004, Latvian firm Laval posted Latvian construction workers to Sweden and refused to acknowledge the existing collective agreement with the Swedish Building Workers’ Union.
As Sweden has a well-functioning collective bargaining and agreement system and does not have an across-the-board minimum wage bound in law, Laval claimed that it was not obliged to pay the rates collectively agreed in the building sector.
The Swedish building union took collective action. Laval claimed to the ECJ that it was being discriminated against on the grounds of nationality and that the Swedish union was infringing upon its right to provide services.
The court found that companies or “service providers” from another EU state are obliged to abide by the host agreement but collective action must be “proportional”. This means that the ECJ believes workers do have the right to take industrial action... but only when the minimum wage or conditions of the host country, or the minimum working conditions set out in the Posting of Workers Directive are being breached by the employer.

In order to cut costs, the Finnish shipping company Viking Line attempted to re-flag its ships as Estonian and operate out of Estonia.
When two Finnish maritime unions organised a blockade of Viking Line, Viking took its case to the ECJ: again, the claim was that the company’s right to freedom of movement was being restricted by the industrial action of the workers. And again, in December 2007, while the court found that collective action to protect posted workers from exploitation was legal, the unions had restricted Viking Line’s right of establishment.

LIP SERVICE TO WORKERS’ RIGHTS
In all of these cases where the ECJ has taken into account the proposed Charter of Fundamental Rights, the court has paid lip service to workers’ rights and found in favour of the company. Three things are clear from these cases and from the text of the Lisbon Treaty:–

BREAKING UNION POWER
These ECJ rulings, combined with the provisions for privatisation and the removal of “distortions” from the market contained in Lisbon, are a recipe for the equalisation downwards of the working and living standards of the people of Europe while the corporations that played a key role in drafting Lisbon increase their profit-making capacity.
The recent failure of the EU to establish directives to protect agency workers and maritime workers from social dumping practices and exploitation, which Sinn Féin MEPs have campaigned for, and the EU Commission’s Green Paper, Modernising Labour Law to Meet the Challenges of the 21st Century, are further evidence of the anti-worker push from Brussels.
Among other things, Lisbon aims to create the legal basis and power to enforce the process of rendering trade unions in Europe powerless by allowing employers to avoid the collective bargaining process established in each country. The result will be the continuing and unchallenged severe exploitation of Eastern European workers and increased job displacement, de-unionisation and falling conditions in the West, with public services fought for and won through generations of struggle throughout Europe being put up for sale.
It’s in the interests of all the working people of Europe for Irish workers and trade unionists to vote ‘No’ to Lisbon on 12 June.