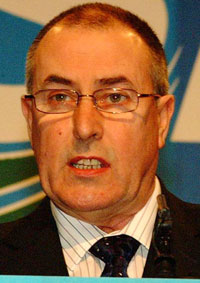 I BELIEVE that this is an opportune time for the building of new political relationships throughout the island. Brian Cowen has been confirmed as Taoiseach; Peter Robinson will shortly be elected as First Minister of the Northern Executive.
Both administrations at the highest levels have endorsed the view that greater integration of the economy on an island-wide basis is in the long-term interests of all the people of Ireland. The political and social integration of the island will be the natural conclusion of such a process.
It is no secret that Sinn Féin believes that a united Ireland is the logical and inevitable outcome, and all other parties on the island (with the obvious exception of the unionists) are on record as having Irish unity as their political objective. Indeed, Fianna Fáil are now reputedly actively considering the possibility of organising in the North, a most welcome development of the all-Ireland agenda.
Although unionist politicians will not say so publicly, there are few of them who genuinely believe any more that there will never be a united Ireland. Therefore we cannot afford to delay in laying the economic and political foundations for future stability.
In 2005, Sinn Féin called on the Irish Government to bring forward a Green Paper on Irish unity. Brian Cowen now has a fresh chance to engage with broad civic and political society across this island to address the opportunities and the challenges in managing constitutional change through a process of peaceful and democratic persuasion.
This engagement should be persuasive and proactive – persuasive in terms of encouraging unionists to embrace the social and economic benefits of a united Ireland and proactive in terms of urging the maximum North/South co-operation in the transition to unification.
It would be to the benefit of all the people on this island if fiscal policy was planned and managed on an all-Ireland basis. I believe that it would also be beneficial if Brian Cowen would take the opportunity early in his leadership to impress on the British Government that the potential for economic and social progress across the entire island is also in Britain’s best interests.
In recent years, Brian Cowen, Dermot Ahern, and Micheál Martin – three of the most senior members of the new administration – are all on public record espousing the practicalities of development of infrastructural, economic, energy, educational and social structures on an all-Ireland basis. But it is not just nationalist political parties that have recognised the need for this unitary approach. It has also been embraced by many business organisations, trade unionists, economic commentators and educationalists.
Hopefully, now that we have stable working political institutions in the North, the leaderships of all of the parties will have the maturity to listen to the arguments for a new approach and adopt an open attitude to exploring all possibilities. Given the public disquiet expressed by politicians of all parties in the North at the dismissive attitude of the British Exchequer’s policy towards the North’s economic requirements, such an approach could provide an opportunity to explore with unionists the benefits of exercising control over our shared economic and political destiny.
An Phoblacht
44 Parnell Sq.
Dublin 1
Ireland