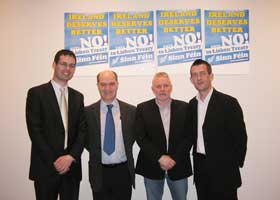 Sinn Féin Senator Pearse Doherty speaking at the Limerick launch of the party’s ‘Vote No to Lisbon Campaign’  said the referendum campaign is very different to previous EU referenda.
“People know that Ireland’s place in the EU is secure and that it is possible to support the EU and be against the Lisbon Treaty. People will be deciding how to vote on the basis of how this Treaty will impact on Ireland’, he said.
Doherty said Sinn Féin believes Ireland’s place is in Europe, that co-operation with European partners is valuable and must continue but that the Lisbon Treaty was a bad deal for Ireland and for Europe.
Maurice Quinlivan launched the party’s Defend Workers’ Rights, Vote No to Lisbon leafleting and awareness-raising campaign.
“Recent decisions by the EU have marked a clear shift away from the European Social Model.  The Lisbon Treaty underpins this direction. If ratified this Treaty will deepen social exclusion throughout the Union and will fundamentally undermine workers’ rights”, Quinlivan said.
“Successive surrendering of workers’ rights by EU institutions at the behest of a weighty business lobby continues to leave millions of workers throughout Europe with decreasing employment security. Hard-won terms and conditions are being stripped away and workers are pitted against each other in what is now popularly referred to as the race to the bottom”, he said.
Limerick Sinn Féin chairperson  Pádraig Malone said the Treaty will force the 26 Counties to sign up to an open-ended commitment to progressively improve its military capabilities.
“The same government that leaves people lying on hospital trolleys and pursues children trying to establish their right to education through the courts is going to have to spend taxpayers’ money increasing our military capabilities and making us compatible with NATO nations. Nowhere in the Lisbon Treaty are the rights and responsibilities of military neutrals like Ireland acknowledged”, Malone said.
An Phoblacht
44 Parnell Sq.
Dublin 1
Ireland