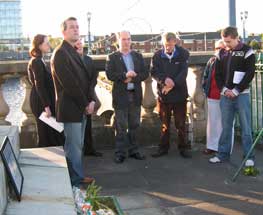 On the Anniversary of the death of Bobby Sands on Monday 5 May a crowd of more than 30 Limerick republicans gathered at the 1916 memorial on Sarsfield Bridge. The commemoration to remember Bobby Sands and the nine other 1981 Hunger strikers has been held continuously in Limerick City on the 5 May since the Hunger Strike in 1981.
The commemoration was chaired by Maurice Quinlivan local Sinn Féin spokesperson.
Jenny Loughman read the names of the Hunger Strikers and a minute’s silence was observed for all those who died.
Martin O’Loughlin laid a wreath on behalf of the Republican Movement in Limerick.
David O’Connor from the University of Limerick branch of Sinn Féin read The Rhythm Of Time a poem by Bobby Sands.
Pádraig Malone Chairperson of Limerick Sinn Féin delivered a short address during which he said:  “The H-Block men spent five long years on the blanket without their own clothes – nothing but a blanket. This was followed by the inhumanity of the no-wash protest. Women in Armagh prison joined in the protests and three of them were on the first Hunger Strike. The no wash protest was followed by the horrors of two hunger strikes, the second in 1981 lasting a torturous seven months.
Despite electing Bobby Sands as an MP, having many tens of thousands of people on the streets, including more than 10,000 people marching in this city on the day of Bobby’s funeral we could only watch, as they died one by one in that terrible year. However Bobby Sands and his nine comrades didn’t die criminals, as Thatcher would have it. They inspired many millions throughout the world and the prison strike in fact criminalised the British presence in our country.  Sinn Féin is now stronger than at any time since the 1920’s.
Maurice Quinlivan ended the commemoration by thanking all those who attended and urged all those present to get involved in the local campaign supporting a ‘NO’ vote in the forthcoming Lisbon Treaty referendum.”