Gang violence in Ballymena: 'Only a matter of time before someone else is killed' 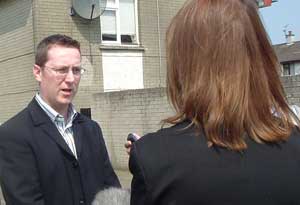 IT HAD been hoped that the public outcry following the vicious sectarian murder of Catholic schoolboy Michael McIlveen in 2006 would have drawn a line in Ballymena which would never be crossed again. Yet, two years later, local Sinn Féin MLA Daithí McKay has warned that it is only a matter of time before another fatal gang attack takes place in the town.
According to official statistics, there were 275 sectarian attacks in Ballymena over a two-year period. At the same time, 294 members of the public were warned by the PSNI that their lives were under threat by paramilitaries. The statistics for 2005 to 2007 were released during a meeting of the Policing Board.
But according to Sinn Féin MLA Daithí Mckay, the figures do not fully reflect the increasing problem of sectarian and gang-related violence and criminal activity within the town. “The PSNI have admitted Ballymena has a higher rate of gang-related criminality than any other area in the North and that it shows no sign of abating,” said McKay.
On 8 May 2006, 15-year-old Catholic Michael McIlveen was targeted and beaten to death by a sectarian gang. He had been confronted by a loyalist gang armed with baseball bats after spending an evening with friends at the local cinema and minutes after leaving a pizza takeaway.
The victim was chased by the gang for almost a mile before being cornered in an alleyway. He was beaten with baseball bats until he fell to the ground and then members of the gang took turns to jump on his head. Michael suffered severe head injuries and died two days later.
The killing had been the culmination of a series of sectarian attacks within the greater Ballymena area. There are over 100,000 Catholics living in Ballymena, representing one fifth of the town’s population. After the murder, Sinn Féin called on the DUP to give public recognition to Ballymena Catholics as equal citizens within the town.
The DUP’s initial response was to suggest the attack had not been sectarian while DUP council leader Roy Gillespie announced the murdered schoolboy would not go to Heaven because the Pope is the antichrist and Catholicism is not the true faith.

TEENAGERS
Two years later, and Sinn Féin is concerned that a similar pattern of sectarian abuse is emerging in which Catholic children are initially targeted for bullying at school. This later escalates into intimidation on the streets by violent gangs.
“Catholic teenagers are often too afraid to leave their homes at night. The town centre and leisure facilities are off-limits to them. Sectarian intimidation and the threat of violence leave Catholic teenagers unable to go the cinema, the pizza restaurant or swimming pool in the town. It’s a virtual no-go area for Catholics,” said Sinn Féin’s McKay.
The failure of unionist political leadership in the town to curtail the activities of sectarian thugs has also led to a wider escalation of criminal behaviour emanating from the same gangs.
“There is clearly a gang culture here in the town and that is where many of the sectarian attacks are emanating from. What is particularly concerning is the fact that minors are becoming involved in this behaviour, something that became clear when Michael McIlveen was killed in the town.”
The North Antrim Sinn Féin MLA added:
“Much more needs to be done to tackle this problem, not only from the PSNI but also by political representatives in this area. I know of cases where people cannot even venture out of their homes for fear of attack. In this day and age it is unacceptable that local people’s freedom of movement is compromised by sectarian thugs.”
An Phoblacht
44 Parnell Sq.
Dublin 1
Ireland