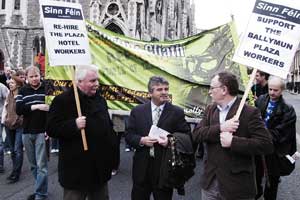 THE 65 workers previously employed at the Ballymun Plaza Hotel in Dublin are continuing their efforts to flag up the handling of job creation by the Ballymun Regeneration Project through protests and by gathering a petition with 5,500 local signatures which calls for the reopening of the hotel.
The Ballymun Plaza was closed last month in a dispute between the landlord and the hotel’s operator.
One of the workers, Seán Corcoran, said during a rally last week on May Day:
“We are holding this rally to demonstrate to the owners, Bennett Construction, and to any prospective operator that the workers and our community will not accept this kind of treatment.
“This hotel was built as part of the Ballymun Regeneration project. It was built as part of a string of promises to the Ballymun community including not only new housing but decent employment for local residents.”
Hazel Dempsey, who worked as a waitress, said:
“When we were evicted we received no notice and have not heard from our employer since. We are owed wages, holidays, bank holidays and more. Last Friday, our wages did not go into our bank accounts. With absolutely no notice, myself and my co-workers face uncertain and tough times ahead, including possible eviction from our homes. We are all struggling to make ends meet for ourselves and our families. With no documentation such as letters from the company confirming our lay-off or P45s we have even had to struggle to receive unemployment benefit.”
The Sinn Féin TD and spokesperson on Workers’ Rights, Arthur Morgan, backed the workers’ call to be reinstated and for a Government investigation into the whole affair.
“I am calling on the Government to launch an investigation into the situation that has arisen in Ballymun and to set new guidelines for companies involved in regeneration projects. This project ran over-time and over-budget in Ballymun and now one of the companies awarded a slice of what ended up a very lucrative pie appears to be acting dishonourably to local workers.”