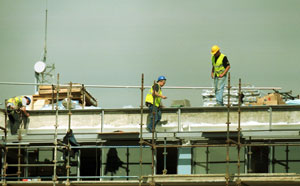 THE construction industry has lost almost 1,500 jobs in recent weeks and a Sinn Féin-sponsored debate on the crisis saw a motion calling for a strategy to enable the industry to plan for the future and safeguard jobs was passed by MLAs this week.
Speaking during Monday’s Assembly debate, Sinn Féin West Belfast MLA Paul Maskey, deputy chair of the North’s Assembly Enterprise, Trade and Investment Committee, said:
“Some 85,000 people are employed across the construction industry in the North, making it one of the largest employers. Yet the industry estimates that some 1,500 people have lost their jobs in recent months and some are now considering a four-day week. If things don’t improve and a joined-up approach between Government departments isn’t developed there will be more job loses.”
Maskey said that the recent house price fall of between 10 and 30 per cent is having a massive impact on the industry. Huge uncertainty in the housing market means that developers are simply delaying building works.
“There are no concrete proposals on the table about the social and affordable housing programme and major developments such as the Maze/Long Kesh are caught up in the indecision of others in the Executive.
“The work needs to begin on the social housing front, many thousands of homes need to be built so the plans for this need to be formulated as a matter of urgency to enable the industry to prepare.
“The Investment Strategy is a very good thing for the industry but departments need to inform the industry when the new builds will be starting as this will allay the industry to prepare for when the work commences. The problem is that the departments are only drip-feeding the industry. What we need is a clear timeframe that will allow the industry to prepare. Departmental plans for capital programmes linked to the construction industry need to be produced.
“The other key issue that has been well documented is planning. It can take two to three years for planning applications to be approved or declined. The planning process is slowing up development with massive consequences for the industry. Compare this to the Dublin Docklands where some planning applications are fast-tracked and have been approved in six weeks following consultation with the local community and stakeholders to ensure that the best development possible is the one that is approved. This type of working together has had massive benefits for that area and community.
“Many of the smaller employers and local trades people are also finding it difficult to survive as larger companies are doing smaller work schemes like extensions and refurbishments, so local people are losing out on local work.
“We must also ensure that policies are in place to enable our young people to get skilled up through apprenticeships and to learn the trade and for them to become the skilled construction workers of tomorrow.
“There is too much bureaucracy and red tape. We urgently need a strategy to enable the industry to plan for the future and safeguard jobs.”

The Sinn Féin motion passed in the Assembly on Monday, 21 April reads:

“That this Assembly notes with concern the job losses in the construction industry in recent times and calls on the Minister for Enterprise, Trade and Investment to establish a working relationship with all his Executive colleagues and key stakeholders from the industry to devise a strategy aimed at creating further opportunities and sustaining jobs in this sector.”
— Paul Maskey, Francie Brolly, Barry McElduff and Cathal Boylan