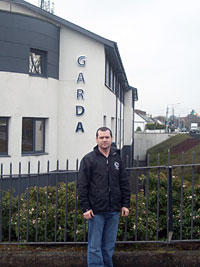 Councillor Paul Donnelly: ‘We need to bring gardaí closer to the community and to increase public confidence’