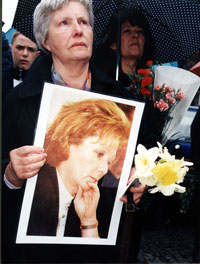 DID the British state collude in the murder of a citizen within its own jurisdiction? That’s the key question of the inquiry into the killing of Rosemary Nelson, according to counsel for the inquiry, barrister Rory Philips.
During an opening address, Philips said allegations that the British state, through its various agencies, was involved in the killing of the Lurgan defence lawyer in March 1999 are at the core of the inquiry.
The task of the inquiry is to investigate “very troubling suggestions at their highest of state involvement in the murder of one of the state’s own citizens”, said Philips.
He outlined that the inquiry is to investigate if “the state and its agencies played a role in the killing either through its actions or its omissions and  if there had been a widespread and long established conspiracy against Mrs Nelson”. He added:
“At the time of her murder there was a perception that has persisted to this day: that she was killed for her work [as a solicitor].”
The barrister compared aspects of the killing of Rosemary Nelson to the murder of Belfast solicitor Pat Finucane ten years previously, in 1989.
The compelling detail of British state collusion in the murder of Finucane, already within the public arena, forced successive British governments to initiate a series of British inquiries. To date, the British Government has refused to disclose the full detail of its own investigations.
Both solicitors had been subjected to continuing threats from the RUC Special Branch prior to their murder but what set Rosemary Nelson’s case apart, said Philips, was the fact that she had reported threats prior to her death.

STATE REFUSAL
One of the questions likely to be pursued by the inquiry is why did the British state refuse to protect her?
The striking feature of Rosemary Nelson’s death was that it had been so clearly foreshadowed, said Philips.
“Unsurprising, therefore, after her murder there were many who wanted to know whether more could have been done to protect her and whether her murder could have been prevented.”
A list of top officials, including the director and co-ordinator of British Intelligence in the North, the head of Special Branch, and officers handling agents across a range of British agencies have already been questioned by the inquiry.
Amongst those questioned were 19 MI5 intelligence officers, eight top British Army intelligence officers and 30 police officers up to the rank of assistant chief constable.
The inquiry expects to hear evidence from over a hundred witnesses and glean further evidence from over 300 other witness statements. The first witnesses are expected to be called by the end of the month.
The inquiry is being led by a panel of three British officials: Michael Morland, a retired British High Court judge and former member of the 1974 Gardiner Commission on internment; Valerie Strachan, former chairperson of the British Board of Customs and Excise; and Anthony Burden, former South Wales Chief Constable and former president of the British Association of Chief Police Officers.
An Phoblacht
44 Parnell Sq.
Dublin 1
Ireland