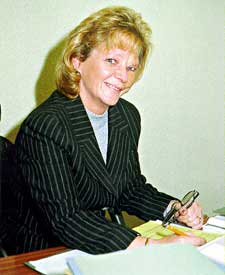 AN INQUIRY into one of the most controversial killings in the North of Ireland opened in Belfast this week. Lurgan lawyer Rosemary Nelson died of her injuries after a bomb attached to her car exploded as she drove to work in March 1999.
On the day she died, Rosemary Nelson drove from her home at around 12.40pm. A booby-trap device exploded under her car as she braked at a junction. She sustained serious injuries and died a short time later at the scene.
Before her death Rosemary Nelson had been the focus of international concern and issues around her safety had been raised to the British Government by a wide range of human rights and lawyers’ organisations.
Aspects of the killing were immediately recognised as similar to those surrounding the murder of Belfast lawyer Pat Finucane in 1989, a killing widely recognised as a result of British state collusion.
In the wake of the killing, amongst those calling for an independent public inquiry were the Law Society, Amnesty International, the United Nations, the European Parliament and the US House of Representatives.
The inquiry is to be led by British retired High Court Judge Michael Morland and is estimated to take at least two years. British intelligence officers, police chiefs and top civil servants are expected to be questioned about allegations of British state collusion in the killing.
The 40-year-old mother of three became the target of official hostility and threats after she gave legal representation to a number of cases challenging the RUC and British agenda. Rosemary Nelson represented the family of Robert Hamill, a Catholic kicked to death by a loyalist mob while RUC officers at the scene failed to intervene.
She exposed crucial evidence used in the conviction of a high profile republican, Colin Duffy, as unsound (Duffy was subsequently released). And Rosemary Nelson also represented Catholic residents from Portadown’s Garvaghy Road who were resisting Orange Order parades through their area to Drumcree.
Aspects of the killing under review will include repeated death threats made against Rosemary Nelson by members of the RUC and Special Branch and the failure of the RUC, under the then Chief Constable Ronnie Flanagan, to take action in relation to threats made by their officers.
Further controversial aspects of the killing include the refusal of the British state to protect Rosemary Nelson despite repeated requests from a wide range of people and agencies, including international lawyers, the US Congress and United Nations Special Rapporteur Param Cumaraswamy.
Also under scrutiny will be the circumstances of the killing and the subsequent failure of the RUC to secure the crime scene and follow-up investigation.
The inquiry follows recommendations by Canadian Judge Peter Cory who was tasked to make an independent assessment into allegations of British state collusion in the killing.
During negotiations with political parties around the implementation of the Good Friday Agreement in 2001, the British and Irish governments agreed to review a number of controversial killings where state collusion was suspected.
In 2003, Cory recommended inquiries into all six of the killings he had been tasked to consider, including the murder of Pat Finucane, Robert Hamill and Rosemary Nelson.
In the wake of the Cory report, the British government rushed through the Inquiries Act, legislation enabling British ministers to restrict the terms of the inquiry by allowing evidence to be given in secret.
Cory subsequently accused the British government of “changing the goal posts” and cast doubt on the veracity of an inquiry conducted under the new restrictions.