Rallying call for solidarity with Palestine 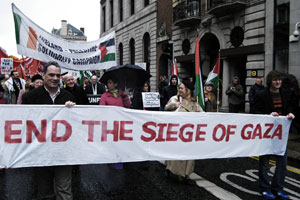 THE 60th anniversary of the massacre of Palestinian civilians by Israeli settlers at Deir Yassin and the ongoing crisis in the Gaza Strip was marked in Dublin on Saturday by a march in solidarity with the people of Palestine.
Organised by the Ireland Palestine Solidarity Campaign, the rally saw a host a different groups come together, among them Sinn Féin, and march through the capital despite the torrential rain.
At the Central Bank in Dame Street, Senator David Norris addressed the crowd. From there the march continued up to Leinster House. Outside Leinster House, Labour TD Michael D Higgins and the Sinn Féin MEP for Dublin, Mary Lou McDonald, spoke.
Urging people to support the cause of the Palestinian people, McDonald said:
“An injustice never goes away and the consequences of an injustice need to be dealt with. They need to be conquered. And I think that our political class – domestically and at a European level – need to understand that they need to confront the issue of Palestine with integrity, with truth, and with determination.
“Michael D Higgins has referred to all the buzzwords that are used, all the cloaks for evading responsibility. ‘Terrorists,’ we’re told. ‘Terrorists,’ those that call for justice for Palestine. We have revisionism, and we know all about that in Ireland.”
If the EU was serious about the values that the EU claims are quintessentially European, she said – the values of democracy, the rule of law, human rights – if those things were real, and held as the baseline values of that union then the Euro-Med agreement affecting trade with Palestine and Israel would by suspended.
“Some people in Leinster House who argue for the great Europe throw Palestine in your face and they say: ‘Do you not want a common approach to Palestine? Do you want a common and powerful approach to Palestine?’ I have to say that, on the basis of evidence to date, I do not want the European approach on Palestine to be a policy that is about cover-ups and lies.”
From Leinster House the march continued to the GPO in spite of the miserable conditions. Coming down Dawson Street and crossing O’Connell Bridge, the march attracted a lot of interest and support from the public.
Outside the GPO the final speakers of the day addressed the resilient crowd. Bassam Nassar, spokesperson for the Palestinian community in Ireland, spoke with passion about his homeland and the crisis there.
“I would like to thank you all for being here with us commemorating the 60th anniversary of the massacres of Deir Yassin. In 1948, groups of militias came along and killed 100 people in cold-blood, overnight – 54 of those were innocent young people under the age of 21.
“There was no reason but the fact that the Palestinians – the innocent civilians, inhabitants of Deir Yassin, a little town – wanted to defy the existence of Israel. They didn’t consider that these people were innocent, they were civilians. They took their lives away because they were just Palestinians.
“These massacres have been conducted by Israel on and on and on over the last 60 years and the great evidence of what they are doing now in the Gaza Strip is just the continuation of these war crimes.
“Israel has the perpetual habit of continuing and carrying it out under the supervision of the Hague, the United Nations, and the world. We, as a free nation, as a freedom-loving people, we have to do something to stop all these war crimes, not in the name of hating the existence of the state of Israel. It’s not just the Israelis who have the right to exist; we, the Palestinians – and according to the Oslo Accord – have the right to exist, in peace, in dignity and in honour.
“The people in the Gaza Strip are under tremendous suffering. They do not have the basic human rights to live. It’s a human catastrophe. What’s happening in the Gaza strip is an actual catastrophe being witnessed by all of us and we are doing nothing.
“I am pleading with all of you here, with the people of Ireland, North and South, we have to stand together against all these punishments and crimes against humanity, against the Palestinian people. We have to start showing the principle of our humanity. We want to live in peace; we demand to live in peace. Please help us to free Palestine. Help us to allow these people their humanity.”
An Phoblacht
44 Parnell Sq.
Dublin 1
Ireland