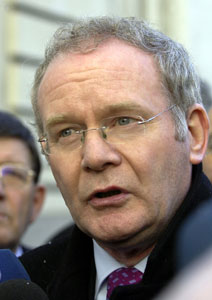 SINN FÉIN President Gerry Adams and Deputy First Minister Martin McGuinness met the new Fianna Fáil leader and incoming Taoiseach, Brian Cowen, on Monday.
The meeting discussed a range of issues including the transfer of powers on policing and justice, the Irish Language Act, the all-Ireland structures and the potential offered by the financial services initiative announced earlier that day.
Speaking afterwards, Gerry Adams said:
“We had a useful, positive meeting. Martin McGuinness and I took the opportunity to brief Mr Cowen on the difficult situation arising from the DUP’s negative approach to the key issues of transfer of powers on policing and justice and the Irish Language Act.
We put to Mr Cowen our view that the Irish Government needs to press the British Government on keeping to its commitment to implement the St Andrew’s timeframe on the transfer of policing and justice.”
The Sinn Féin delegation also extended condolences to the Fianna Fáil minister on the death of former President Paddy Hillery.

COWEN MEETS NEW DUP LEADER
Brian Cowen also held talks with Peter Robinson, the newly-elected leader of the Democratic Unionist Party and First Minister elect.
Responding to media questions after the Cowen-Robinson meeting about his future working relationship with Peter Robinson as both First Minister and DUP leader, Martin McGuinness stressed that he would continue the work of the Office of First and Deputy First Minister with him.
“On the basis that Peter Robinson and Nigel Dodds supported Ian Paisley in all of the decisions he took over the past ten months, and the fact that Ian Paisley and I both jointly share the Executive, I have had a good, positive working relationship with Peter Robinson and all the ministers on the Executive.”
McGuinness described himself and Robinson as “serious-minded people taking serious decisions”.
The newly-installed DUP leader also committed himself to continuing working with the Sinn Féin Deputy First Minister.
The election on Monday, 14 April, of Peter Robinson as leader of the DUP to replace Ian Paisley brought to an end the Paisley domination of the party founded in the early 1970s.
Robinson had served as deputy leader of the party since 1980 and is regarded as a political pragmatist compared to Ian Paisley’s religion-based, fundamentalist ideology.
This political pragmatism sees Robinson travelling across the political landscape from the hardline unionist who led the invasion of Clontibret, County Monaghan, in protest against the Hillsborough deal of 1985 to the leader of the DUP who can meet with the leader of Fianna Fáil in Belfast to welcome a multi-euro investment of Dublin Government funds in the North.