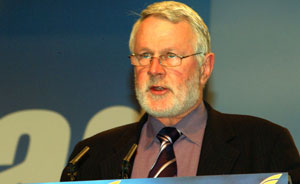 Sinn Féin TD and Agricul-ture Spokesperson Martin Ferris this week described comments by Fine Gael leader Enda Kenny regarding the May World Trade  Organisation (WTO) talks and the Lisbon Treaty referendum as ‘massively contradictory’.
Ferris said:
“Enda Kenny is reported to have said that he does not want a situation where the Irish referendum is decided by the outcome the WTO negotiations. This simply does not make any sense. The farming community would be very wise to take note of how the Commission negotiates on its behalf.
“Enda Kenny bemoans the EU Commission efforts to dilute trade barriers to the cost of Irish farming and agriculture yet in the same breath is urging farmers to vote in favour of the Lisbon Treaty, a treaty which would copper-fasten the fruition of such policies if it comes into being.
“Article 2 of the Lisbon Treaty gives the European Commission ‘exclusive competence’ over international trade agreements. Article 10 of the Treaty makes ‘the progressive abolition of restrictions on international trade’ a key aim of the EU. Article 188 states that decisions on international trade will be taken by qualified majority vote.
“The Lisbon Treaty will empower the European Commission to accelerate its existing approach to international trade, as exampled by Peter Mandelson, regardless of the cost to Irish farmers.
“It will remove the ability of the Irish government to influence the detail of trade negotiations or block the outcome if they are not in our interest.
“Interestingly Deputy Kenny was joined by former Belgium Prime and President of the EU group the EPP, which Fine Gael belong to, Minister Wilfried Martens when he made his comments.  It is worth noting that Mr Martens stated in December 2006 that the “EPP has played a decisive role in the preparation, debate and adoption of the new [Lisbon] Treaty. Now we are also going to lead the final implementation of the text.”
“It is quite incredulous that Fine Gael has played such an instrumental role in dealing such a devastating blow to the Irish farming industry and is now crying foul when their game plan has been shown for all to see. Irish farmers will vote against the Treaty because they understand it is a bad deal for Ireland, Europe and the wider world.”
An Phoblacht
44 Parnell Sq.
Dublin 1
Ireland