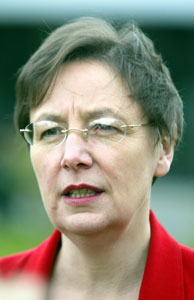 SPEAKING on Monday, 14 April, before an announcement by Finance Ministers Peter Robinson and Brian Cowen on European PEACE III and Interreg funding, Sinn Féin MEP Bairbre de Brún said:
“EU PEACE funding here kick-started a bottom-up approach to decision-making and has allowed some of the most marginalised sections of society to be part of the decisions that affect their area.
PEACE III funding of £222 million will allow ongoing work directed at the twin goals of reconciliation and inclusion.
“Given that there is a smaller amount available than under PEACE I and PEACE II, I would urge the active involvement of the community and voluntary sector as well as local councils. Local communities that are intended to benefit from the funds should be at the core of implementing the programme.
“Interreg has funded some very innovative cross-border projects and the cross-border corridor groups have built up considerable experience in spatial planning in their area. I urge the Assembly to build upon and mainstream the very valuable work begun under Interreg, particularly in the area of energy efficiency, renewable energy and eco tourism. These are fields that are going to be very much in demand in the time ahead.
The Sinn Féin MEP added:
“I also welcome the announcement by Finance Minister Brian Cowen that those in the financial services sector in the South can set up north of the border. This has the potential to create thousands of jobs.”
An Phoblacht
44 Parnell Sq.
Dublin 1
Ireland