Solidarity with Palestine in Dublin and Belfast 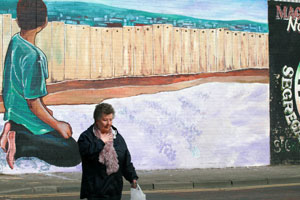 New mural on Falls Road, Belfast to commemorate the Deir Yassin tragedy of 1948

A DEMONSTRATION focusing on the ethnic cleansing of Palestinians from Deir Yassin in 1948 and the continued oppression of Palestinians in Gaza will take place in Dublin on Saturday, 12 April.
In 1948, through a combination of terror and massacre, Palestinians were driven from their homeland and the territory renamed Israel.
Deir Yassin was a small village next to Jerusalem. Although its inhabitants hadn’t taken part in the fighting to defend Palestine, it was here that the most infamous massacre took place 60 years ago. On the morning of 9 April 1948, Zionist forces drove into the village, rounded up the men, women and children and cold-bloodedly massacred them. The massacre was pre-planned and designed to terrorise other Palestinians into fleeing.
Afterwards, 25 of the survivors were paraded around Jerusalem, then taken to a quarry and murdered.
March organisers have pointed to the fact that today around a million and a half people in Gaza are being collectively punished. They are imprisoned; women and children are starved of food and water; communities are subjected to aerial bombardment, tank and rocket attacks; homes are denied electricity, medicines, and sewerage facilities.
“They are being denied a future. Hundreds have died so far this year. This senseless brutality must stop if there is ever to be peace.”
Ógra Shinn Féin has called on republicans to mobilise in Dublin this Saturday in support of the people of Gaza.
“Israel’s continued oppression of the Palestinian people cannot be allowed to go on. Israel’s continued occupation of Palestine and the oppression of her people is akin to the atrocities of the British in Ireland,” according to Peadar de Bluit, campaigns officer with Ógra Shinn Féin.
The march will depart from the Central Bank on Dublin’s Dame Street at 2pm and will be followed by a public meeting in Wynn’s Hotel at 4pm. Speakers include Sinn Féin MEP Mary Lou McDonald.
Also this Saturday, as part of a year-long series of events to mark this tragic anniversary, a new mural will be unveiled on the ‘International Wall’ at the bottom of the Falls Road in Belfast dedicated to all Palestinian refugees. A number of Palestinian refugees living in Belfast will be present to assist with the dedication and to say a few words on behalf of their people and their cause.