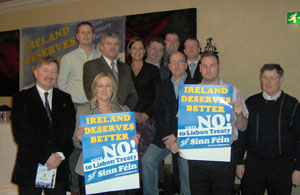 SINN FÉIN in the north-east launched its campaign against the Lisbon Treaty this week in Drogheda.
Mary Lou McDonald, Sinn Féin MEP, was the main speaker at the event which was also addressed by Louth TD Arthur Morgan and Meath Councillor Peadar Tobin.  Louth Councillor Imelda Munster chaired a question and answer session for an audience of up to 100 people.
An Phoblacht
44 Parnell Sq.
Dublin 1
Ireland