Green Party Minister tackled as he visits the Garden County 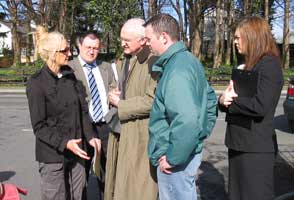 SINN FÉIN activists from across Wicklow made a number of demands of Environment Minister John Gormley when he visited the county last Monday.
In the morning, Sinn Féin Councillor John Brady joined with the families and friends of the two firefighters killed in Bray last year and called on the minister to use his power to have an independent inquiry conducted into the circumstances that led to the their deaths. They also called for the minister to act on the Farrell Grants Sparks Report, which amongst other recommendations called for the establishment of a national fire authority.
Speaking after the meeting, Councillor John Brady said:
“The issues we raised with the minister today are of critical importance to the people of North Wicklow. The fire service in this area is operating at less than 50 per cent of the recommended level. That is unacceptable and the minister needs to act on it immediately before we have another avoidable tragedy.”
After visiting Bray, the Green Party minister moved on to Wicklow Town.
Here, Sinn Féin activists, including Wicklow Town Councillor Eamon Long challenged him and his party on two key issues over which they have a say in government. Councillor Long said the issue of coastal erosion at an area known as The Murrough had been “long-fingered for too long”. He said: “It was not good enough for this or any other minister to just come along and have their pictures taken at key locations. Investment and action was needed immediately, not photo-opportunities.”
Referring to a housing estate in the town, Councillor Long accused the minister of “holding the residents of Ballyguile to ransom” by his refusal to release funding for the upgrading of the estates dilapidated sewage system and other improvements until infill housing was put on the estates only level open green space.  Councillor Long said:
“This bullying is not acceptable.  The people of Ballyguile deserve and urgently need this upgrade work to improve the quality of their lives and area.  Surely a Green Party minister can appreciate the importance of retaining and improving the only level green space in the estate as an amenity for the residents rather than add to the concrete jungle.”
Minister Gormley’s next stop was Blessington, in west Wicklow, where he was to meet members of the local community forum, including local Sinn Féin representative Gerry O’Neill.  O’Neill handed the minister a letter urging the Minister to address what he termed was the “democratic deficit in West Wicklow”. The Sinn Féin representative said that west Wicklow, with major towns like Blessington and Baltinglass, had only three county councillors. “Serious consideration,” he said, “needs to be given for the creation of a local council or councils to ensure that the concerns of the people in the west of the county are addressed by people from the area.”
O’Neill also raised the issue of Tallaght Hospital, objecting to any attempts to downgrade services there, saying “it is a vital public health service for the people of this part of Wicklow”.