'We can make a better Ireland' 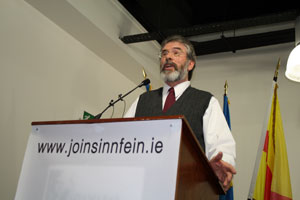 WE WILL see a united Ireland within our lifetime but the real test is that can we make it better. That’s the message Sinn Féin President Gerry Adams brought to Belfast at the first of a series of nine public meetings to be held throughout the North.
It was a message clearly close to the hearts of all those who attended as a comprehensive range of questions concerned with progressive change was tabled to the Sinn Féin panel.
Held in Belfast’s Europa Hotel, the hall was packed to capacity with up to 800 people present. Chaired by Sinn Féin MLA and party whip Carál Ní Chuilín, the panel consisted of high-profile Sinn Féin politicians responsible for a wide range of issues and working within a large number of different political arenas.
As well as Gerry Adams, West Belfast MP and MLA, there were MEP Mary Lou McDonald; Minister for Education Caitríona Ruane; Gerry Kelly, north Belfast MLA and Junior Minister in the Office of First Minister and Deputy First Minister; and Alex Maskey, MLA and member of the Policing Board.
Any media expectation that the meeting would collapse into negativity and recrimination was quickly dispelled as the people of Belfast got down to the real business of discussing the advance of progressive change.
Questions were tabled concerned with equality and education, the advance of the Irish language, the importance of unionist outreach, addressing discrimination against the Traveller community, and opposition to the Lisbon Treaty.
Other hot topics included the transfer of policing and justice, development of community policing and safer neighbourhood projects, support for victims and survivors of state violence, and the issue of collusion.
And throughout it all was a vision of a future better for everyone, North and South, unionist, nationalist and republican, young and old. Of course, there is a great deal of work being done and needing to be done but one thing was clear from the meeting, no shortage of talent and commitment.
Reflecting on the legacy of Wolfe Tone and describing Belfast as “the cradle of modern Irish republicanism”, Gerry Adams highlighted the progress we’ve made and the progress we need to make.
“On the tenth anniversary of the Good Friday Agreement it is perhaps useful to reflect on where we are at this time and consider where to we want to go. We want to see a national republic on the island of Ireland, an end to partition, the unity of Orange and Green, and harmony between the people who live here and an end to the union with Britain. That’s what guides us and informs us everyday as we work at it,” Adams said.
Gerry Adams recalled the imposition of partition and the dark days of unionist misrule and the Dublin Government’s abandonment of Northern nationalist community and the long journey since.
“If we reflect back on where we’ve come from, it’s clear that we are in a better place. Most people have some sense that things are moving forward.”
Addressing the issue of anti-social behaviour, criminality and dealing with the PSNI, the West Belfast MP said he is confident that the community “which has never bowed a knee” won’t allow small groups of thugs to set the agenda within our communities.
Alex Maskey outlined Sinn Féin’s role within the policing boards in holding the PSNI to account. Anti social behaviour and criminal activity is not just a problem in nationalist areas, unionist areas, particularly working class neighbourhoods, were experiencing similar levels and facing similar difficulties with the PSNI. “The transfer of policing and justice powers is the key to the achievement of accountable policing,” said Alex.
Responding to a question about the Irish Language Act, Caitríona Ruane described the generosity of many unionist teachers and pupils in greeting her with a few words of welcome in Irish, as compared with the apparent paranoia of some unionist politicians.
Mary Lou McDonald spoke about the battle for “hearts and minds” and the role of the power-sharing executive in the North in progressing Irish unity. “We’re being watched, carefully watched by people in the South,” said Mary Lou. Sinn Féin’s ability in securing progressive change through the northern institutions will be a measure by which our future in the south is judged, she argued.
Gerry Kelly spoke about working with the DUP within the OFMDFM and reflected on the resignation of Ian Paisley. “The DUP is clearly a party in transformation,” said Kelly.