Taking Back Our Communities 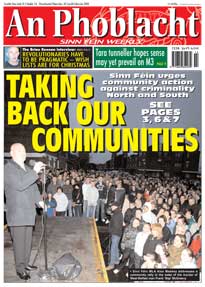 COMMUNITY SAFETY is an issue Sinn Féin is addressing around the country, and no more so than in west Belfast, particularly in the wake of a number of brutal murders such as that of Harry Holland, John Mongan and Frank ‘Bap’ McGreevy.  Here Sinn Féin President GERRY ADAMS, MP for West Belfast, appeals for people to play their part, to stand up for their families against the thugs.