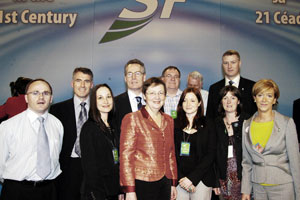 THE 2008 Sinn Féin Ard Fheis saw the election of a new Ard Chomhairle and for the first time in many years a new Director of Publicity was elected. Donegal native Rosaleen Doherty replaces Dawn Doyle in the publicity brief. Doyle  was recently appointed to the position of 26 County Director of Political Operations.
In his Presidential address Gerry Adams acknowledged Dawn Doyle’s work over almost 10 years as Director of Publicity and said that she was taking up even greater challenges as the party concentrated on its regeneration in the 26 Counties.
The officers and 12 members elected by delegates to serve on the Ard Chomhairle for the following year are listed on the right.