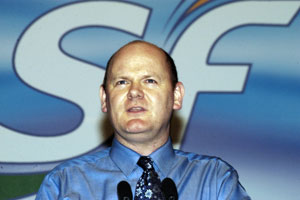 DUBLIN MEP Mary Lou McDonald opened the Saturday morning Ard Fheis section on Social & Community Affairs by acknowledging the contribution of immigrants to Ireland. She went on to further speak about the challenges of racism and “the pressing need to build gaps of understanding and to address prejudice”.
The Sinn Féin Chairperson also said that republicans reject both racism and sectarianism “which can poison a society, foster division and diminish all of us”.
McDonald spoke of the importance of managing inward migration to ensure there is a system that is fair, transparent and efficient, while pointing out the flaws in the Immigration, Residence and Protection Bill currently going through the Dáil.
“The Government’s Immigration Bill falls short of the mark. Family reunification is ignored and the protections for victims of trafficking inadequate. Most worryingly is the lack of appeals mechanism... the solution to this is to provide a transparent, independent and accountable system of review.”
A motion calling for the extension of voting rights for EU and non-EU nationals on the basis of a six-month residency requirement saw Shannonbrooke Murphy (Galway) speak in favour. She said it would extend to non-Irish nationals the rights equivalent to those they already have with respect to local elections and embodied the republican principle of “no taxation without representation”.
Speaking for the Ard Chomhairle, Seán Mac Brádaigh said the motion’s implications were very far-reaching and that the type of in-depth discussion required in advance of such a proposal had not happened within the party. Delegates needed to recognise that the adoption of such a policy would put Ireland way out of line with the vast majority of countries around the world, he said.
The motion was defeated.

HOUSING
A series of motions on housing were also tabled during this session. Six-County spokesperson on Housing Fra McCann MLA (West Belfast) spoke of the lack of action by Social Development Minister Margaret Ritchie in the implementation of a housing strategy to deal with the growing crisis in the social housing sector and her inability to establish an affordable housing sector. “Over 20,000 people declared themselves as being homeless [in the Six Counties] last year, and if things keep as they are we are in for another record year.”
He went on to describe how Margaret Ritchie announced that everyone will be able to buy a share of their home yet not providing additional social housing units. “Is this the SDLP’s way of dismantling the social housing sector in order to make way for the private sector to take over this role?”
Dublin City Councillor Daithí Doolan spoke in favour of a motion which noted that urban sprawl presents huge environmental and social challenges in Dublin and surrounding counties. He urged local authorities in Dublin to initiate a full and democratic debate on the building of high-rise in the region.
“Urban sprawl has become a blight on the eastern coast of Ireland and must be tackled as a matter of priority. It is no longer satisfactory to simply expect people to move out of Dublin and spend hours commuting to and from work, leading to daily traffic chaos.
“Any future residential developments in Dublin must be based on meeting the housing needs of the city and building communities that are environmentally and socially sustainable.”