Doherty makes impassioned call for fightback for the West 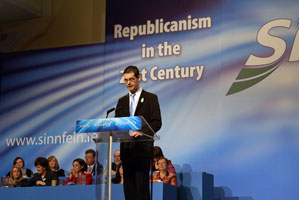 In his introduction to Gerry Adams’ Presidential address to the 2008 Sinn Féin Ard Fheis, the party’s newly elected Senator Pearse Doherty made an impassioned plea for the future of the west of Ireland.
“At 5pm on Thursday, 9 January four postmasters turned the lock of the door of their post offices for the last time ending in some cases over 60 years of postal service in those communities.
What they had in common was that these post offices were all in the west of Ireland — in Roscommon, Mayo and Donegal.”
He said the list of such closures was endless.
“Whether it is the loss of traditional faming, fishing or manufacturing jobs or the closure and running down of public services such as health, the withdrawal of public transport, the closure of rural schools, shops, pubs or Garda stations, all this highlights one clear fact — the West of Ireland is suffering a death by a thousand cuts.”

Stories of hardship
“That man later died at home”, he said
“We heard of the two women from the west, one, a lone parent and one, the mother of disabled children who opted for a mastectomy rather than place a heavy burden on their families by travelling hundreds of miles to Dublin for treatment.”
He said that such a situation should not be tolerated in this day and age and on behalf of Sinn Féin he extends an invitation to elected representatives from all parties and none and all organisations representing the west of Ireland, to come together to agree a platform to ensure the survival of the west.
“No one party or no one organisation is capable of tackling the problems of rural Ireland alone, but as the Irish proverb say ‘Ní neart go cuir le chéile’
“So let us stand together, let us agree a common platform and let us begin the fight back for the west of Ireland”, he said.
An Phoblacht
44 Parnell Sq.
Dublin 1
Ireland